7 December, AtoZForex – Today at 10:00 ET the Bank of Canada (BOC) will announce its Interest Rate Statement. The interest rate is the primary tool the BOC uses to communicate with investors about monetary policy.

Goldman Sachs has shared its views on its expectations about the upcoming move by BOC. An American multinational finance company believes that the central bank will be on hold today. Goldman analysts think that ahead of the ECB meeting on Thursday and the Fed and the BoE next week, BOC will “have a say.”

The bank specifies that Q3 growth emerged slightly stronger that the central bank has expected. Moreover, the risks to Q4 currently seem to be on the upside, even as experts have been flat. 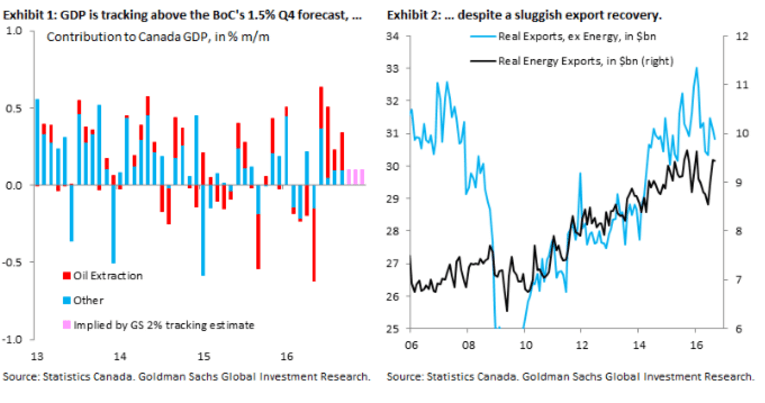 Additionally, Goldman believes that the recent OPEC agreement can influence BOC decision. The financial firm further states that following the successful OPEC oil deal finalization, the central bank of Canada should be firmly on hold.

BOC Governor, Stephen S. Poloz has stated that a rate cut would take an “accumulation of evidence” that development is falling short on expectations. Goldman believes that this seems unlikely to be BOC evaluation not only for today’s report but also for January outlook round.

Rabobank believes that the markets’ expectations imply “the same outcome with almost nothing priced into the front end of the Canadian curve in terms of cuts. “ Moreover, the bank anticipates that today’s decision will not be accompanied by a Monetary Policy Report. Rabobank’s statement is as follows:

“In the aftermath of the MPR release, Canadian data have been somewhat mixed with CPI inflation data printing slightly below expectations on a core basis and retail sales disappointing but GDP data for Q3 showed some signs of optimism.”

Additionally, the bank states that Canada’s GDP have appeared above expectations with a 3.5% q/q annualized reading.