As the new week kicks off, FidelisCM has provided again its analysis and outlook. In the previous week the US dollar remained weak against the Gold and the Yen, while against the other major currency pair, it managed to maintain its ground due to market driven by data releases. As we can see at the relative performance chart. During the week the Gold demand was high as traders’ risk aversion was high until the end of last week.

On Friday, there was a rebound in stocks with US indices closing higher by more than 2%, supported by positive Retail Sales data. Gold and Yen retrace, as the market is driven by economic releases. As of writing the Asian and European Indices are recovering, more specifically NIKKEI has closed more than 7% up today, despite the weaker than expected GDP data for Japan. The Yen weakened as traders sought for riskier assets. 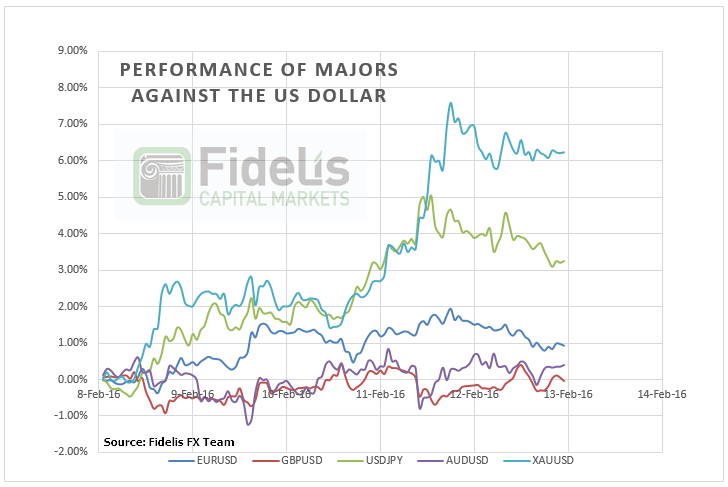 Performance of majors against USD

On the relative chart, the Gold has been outperforming the rest of the currency pairs for a second week in a row. The XAUUSD advanced to 1-year high at 1262.56 and then extended into consolidation. Earlier today the precious metal is retracing lower with next major support level at 1191.78 which is the 38.2% Fibonnachi level of the last upward move from 1071.38 to 1262.56. The Japanese Yen had the second best performance. Having the Yen retrace, USDJPY touched support at 110.97 and has bounced up to resistance at 114.20. Most of the bullish run of Yen and Gold took place on February 10th and 11th when Janet Yellen’s testimony was highly watched. The euro, the aussie and the sterling have been mostly sideways with the trading ending near break-even levels from the previous week.

The latest CFTC data released past Friday for trades up to Tuesday February 9th, show that the net long position decreased further. The most notable weekly changes are the decline of the euro aggregate short positioning and the increase in the net long Gold position. Non-commercial traders’ sentiment remains bullish on the gold and yen, at the same time the bearish sentiment on the euro has weakened.

Early, at the start of the week we see the risk appetite getting improved and the riskier currency pairs recovering. The US is closed today, observing President’s Day thus volume in the evening session would be lower. This week, we expect will be driven by calendar releases, today the ECB President, Mario Draghi speaks and later on looks at the New Zealand Retail Sales. On Tuesday, watch the Aussie RBA Monetary Minutes release and the NZD Inflation expectations; in the evening German ZEW economic sentiment release would be in focus. On Wednesday, we will be expecting GBP Claimant Count Change release and the FOMC meeting minutes report. On Thursday, US Jobless Claims and Philadelphia Fed Manufacturing Index. Closing on Friday with CAD and US Inflation data.

Risk averse sentiment would soften in the near term but we expect it to return, should we see lower inflation expectations and data, combined with central banks’ possible signs of lower or negative rates then gold would revive its bullish run.