Both Gold and Bitcoin are considered to be safe havens in today’s market. These assets are two very watched financial assets at the moment. Hence it is Gold versus Bitcoin in 2017 with the big question who will win?

28 March, AtoZForex – In fact, both Bitcoin and Gold are being grouped together as of late. Following the day when they both traded at the same price, March 3rd. However, if you’re a savvy investor, you know that one will likely to prove to be better than the other. So, who wins 2017? Today, we’ll talk about gold and Bitcoin and do our best to answer that question.

When gauging the difference between Bitcoin and gold, it’s important to understand the euphoria surrounding Bitcoin. You see, Bitcoin is largely considered to be a bet against central banks. As a decentralized currency, Bitcoin is a way of going against the world of finances. The truth is that as human beings, we seem to have a desire to go against the grain, so, doing so creates a bit of a euphoria among those that use Bitcoin.

The Evolution Of Bitcoin since 2008

Invented in October of 2008, Bitcoin has quickly taken the market by storm, and for good reason. You see, when inventing Bitcoin, the founders displayed it as a way to keep assets safe from poor choices made by central banks. This decentralized currency would soon become a big topic of conversation. After all, central bank manipulation, bad mortgages, and generally bad money management in the financial sector led to the 2009 financial crisis.

As Bitcoin became more popular, the euphoria around owning the seemingly meaningless virtual currency gave it the meaning it needed to actually gain value. Once that value was understood, people started investing in Bitcoin all kinds of ways. They would buy and hold it, day trade it, and even get into Bitcoin options trading.

Gold versus Bitcoin in 2017, is the cryptocurrency a match? Throughout the first quarter of 2017, many are forecasting that the value of bitcoin is going to climb. There are a few reasons for this…

1. Growing Usage – At the moment, it is clear that the popularity and usage of the virtual currency increases. This can be seen by the number of Bitcoin ATMs that are popping up around the world. In fact, by November of 2016, Bitcoin had a total of 838 ATMs around the world. That number had grown from just 538 in January of the same year.

2. Central Bank Changes – This year, many are expecting to see quite a bit of movement from central banks around the world. Increasing interest rates in the United States, stimulus packages in Japan, and more have the ability to steer consumers toward the virtual currency.

3. Economic Concerns – Finally, there’s quite a bit of concern around the global economy at the moment. With Donald Trump changing global trade agreements with the United States. While the UK will trigger Article 50 tomorrow, many are expecting that Bitcoin will gain in its safe haven status against. Especially, as an asset to go against the current and ongoing economic concerns.

How Does Bitcoin Stack Up Against Gold?

Gold needs no introduction. In fact, the commodity has history that dates back thousands and thousands of years. Not to mention that to date, it remains one of the most valuable commodities in the world. So, is there really a comparison here? Who would win in a competition; Gold versus Bitcoin in 2017? In my opinion, the answer is no! The truth is that when it comes to strong safe haven investments, Bitcoin is simply inferior to gold. Here are a few reasons why…

The Bottom Line: Gold versus Bitcoin in 2017 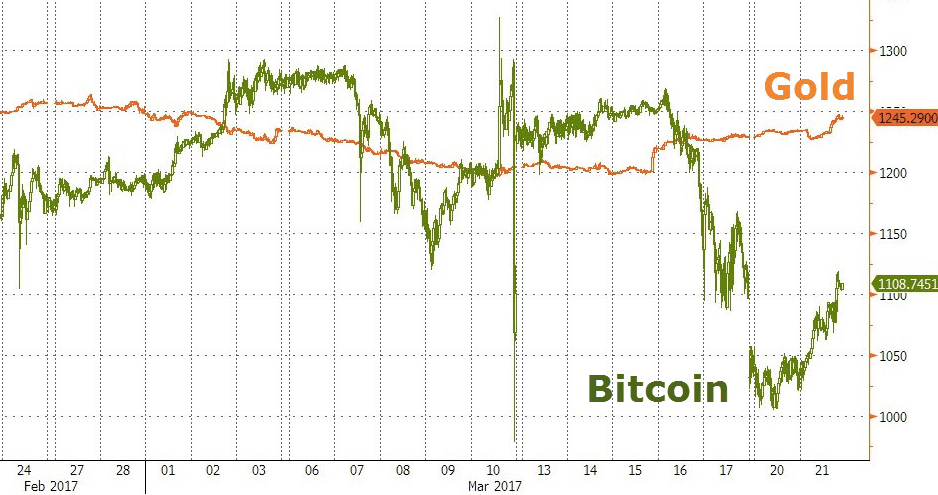 Gold Versus Bitcoin in 2017 Chart (Click to zoom in)

Coming to the conclusion of the Gold versus Bitcoin in 2017 question. I have to say that Bitcoin is definitely an interesting concept. Bitcoin is in no way comparable to gold. At the end of the day, considering the headwinds that are likely for bitcoin ahead, the solid facts when we take away the psychological comparison. Along with the overwhelming trust for gold, my bet is; gold wins this race!