Gold price extends its bullish momentum into a second straight day on Tuesday, having found a strong support near $1500 mark a day before.

On top of the ongoing US-China trade conflict, escalating tensions in Hong Kong, Argentine currency crash, Italian political risks and global economic slowdown ramp up the demand for traditional safe-havens such as the precious metal. Reflecting the markets’ willingness to stay away from risky assets.

Meanwhile, falling US Treasury bond yields and reports of the Federal Reserve considering the option to use countercyclical capital buffers if the economy were to show signs of overheating weigh on the Greenback to help the pair float in the positive territory.

As expected, Gold price edged lower during the first half of the day to a low of $1487.65 before it took some bullish momentum and clinging a new 6-year high at $1519.37 per ounce.

The price is currently trading just above the $1510 level with the momentum getting away slowly from the overbought zone creating a larger divergence between the price and the momentum. We will be focusing on the upside before we turn our attention to a bigger correction. The level to watch is the $1520.64 resistance level. 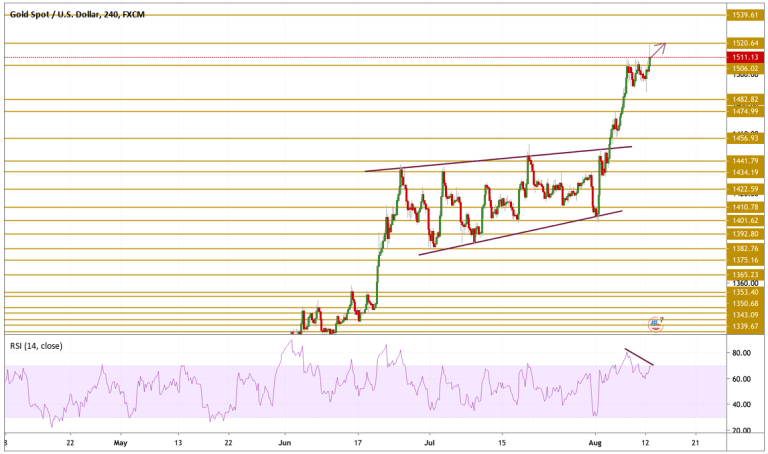 GBPUSD Bears Regained Momentum - Can Decline Towards May's Low?
Forex Crypto
Top 5 Forex Brokers
Top 5 Crypto Exchanges
Your subscription could not be saved. Please try again.
Thank you for subscribing. You will be the first to receive all the latest news, updates, and exclusive advice from the AtoZ Markets experts.
Everyone is reading
SEC Lawsuit Against Ripple May Drag On Until 2022
Ethereum Facing Support Around $2,300 Price Area - Will Strike Upward?
Danske Bank Rejects Cryptocurrency Trading
close ×