June 26, 2019, | SQUARED DIRECT – Tensions in the Middle East moved up a notch after US President Donald Trump on Monday signed an executive order imposing what he called “hard-hitting” new sanctions on Iran. Iran’s president on Tuesday blamed Washington for a steadily escalating row with the US and said the situation will not be resolved unless US sanctions on the country are lifted.

The continued tensions between the US and Iran were not enough, however, to sustain gold’s rally, with the precious metal quoted at $1,408.50 at the close on Tuesday. On the Chinese front, the US delayed the next round of tariffs on USD300 billion additional Chinese goods before the G20 meeting, but the probability of a trade deal between the two countries remains slim given that both presidents seem unwilling to compromise on their respective demands.

Gold price nonetheless started to retreat from the highs after the Euro reversed to the downside driving the U.S. Dollar index higher and encouraging gold investors to book profits.

As expected, Gold price edged lower during yesterday’s session and continue to do so this morning amid a divergence between the price and the momentum. Gold price is currently trading above the $1400 level, however, with the RSI signaling a sharp drop in the momentum away from the overbought zone, we will be focusing on the continuation of the correction and we will be focusing on the $1392.8 support level. 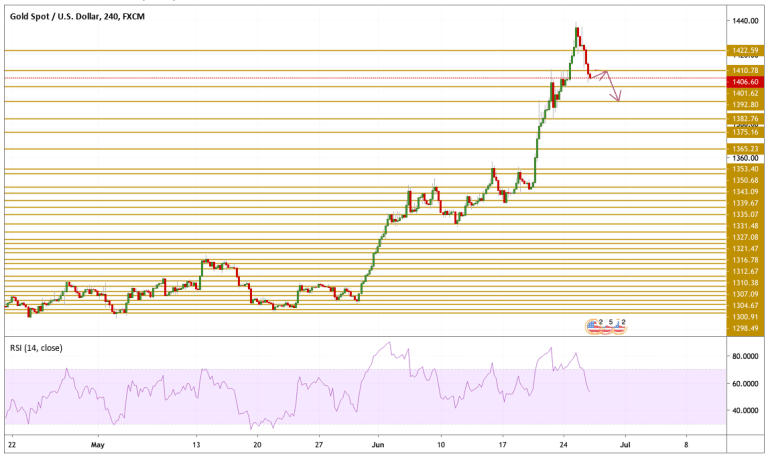