June 24, 2019, | SQUARED DIRECT – Gold price of the yellow metal gained traction this morning as the conflict in the Middle East reached new heights. Late last week, Iran shot down an American surveillance drone and accused the US of incursion and spying over Iranian airspace, while the Pentagon said that the aircraft was in international airspace when it was targeted.

The administration most recently accused Iran of last week’s attacks on oil tankers in the Persian Gulf, which Tehran strongly denied involvement in the explosion. Meanwhile, a more dovish US Federal Reserve has supported the gold market while the US-China trade conflict continued to dent investor sentiment. On the Sino-US trade front, Trump announced last week that he would hold an “extended meeting” with Xi on the sidelines of the G20 summit in Japan. The two-day summit gets underway on Friday.

Gold price regained traction this morning as they are retesting last week’s highs above the $1400 mark. The price is currently hovering between the $1401.62 support level and the $1410.78 resistance level as the momentum slows down a bit in the overbought zone. Despite the existing divergence between the momentum and the price, we will keep on focusing on the upside and this time the $1422.59 resistance level will be on our watch. 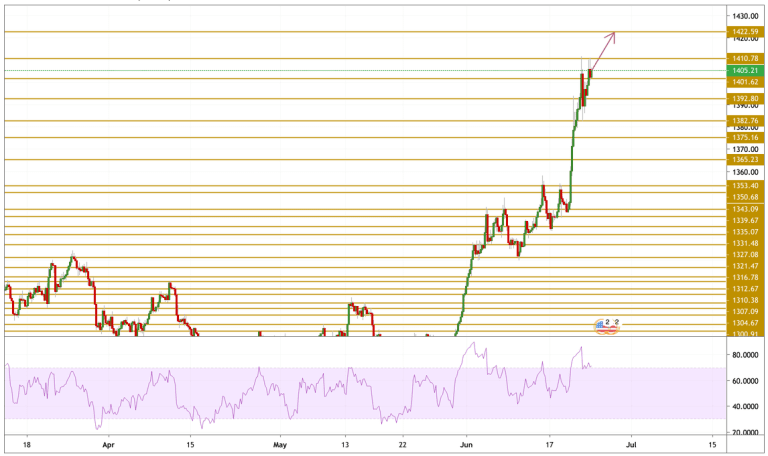 EUR/USD, GBP/USD, BRN/USD and BTC/USD 15 June Live Entry Points
Forex Crypto
Top 5 Forex Brokers
Top 5 Crypto Exchanges
Your subscription could not be saved. Please try again.
Thank you for subscribing. You will be the first to receive all the latest news, updates, and exclusive advice from the AtoZ Markets experts.
Everyone is reading
SEC Lawsuit Against Ripple May Drag On Until 2022
Ethereum Sustains Below $2,500 Psychological Area - Bears to Push the Price Downside?
Will the Prices of Gold and Silver Rise After FED Meeting?
close ×