Gold spiked to its highest price since 2014 after Wednesday’s FOMC meeting outcomes. The following technical insight is based on the Elliott wave theory.

June 20, 2019 | AtoZ Markets – Gold rallied toward 1270 on Wednesday after the FOMC meeting. The rally continued in the Tokyo session as price hit above 1290 overnight. The yellow metal broke multi-year highs to hit its highest price since March 2014. US yields which often moves in the opposite direction of Gold price dropped to its lowest price in 21 months. Prior to the event, Gold rallied to 1340 after dropping from 1358 to 1333 last week. A break above the 1358 intraday high was expected to be resisted at the 1370-1380 strong resistance zone. However, the price spiked above the zone to 1393 – close to the 1400 handle.

What happened at the FOMC?

Amid market expectation, the US Federal Reserve decided to leave rates unchanged. Prior to the event, there were concerns that the rates would be cut. However, the FOMC saw no reasons to cut rates as the economy still looks stable. The statement indicated that economic activity is on the rise and the labor market remains strong. The unemployment rate remains low and job gains have been solid. In addition, the statements included that overall inflation for items other than food and energy are dropping below 2%. The Federal fund rate was therefore kept at 2.25% – 2.5%.

Price is retreating from 1393 to 1380 and currently stays within the 1370-1387 resistance range. Since March 2014, this price range has not been bridged after two attempts in July 2016 and the first quarter of 2018. If the current breakout is sustained, further rally to 1500 handle is very much likely. However, the current dip might go deeper to retest the zone which could now provide support for further rallies. Below the zone are minor support levels above 1300.

Gold Elliott wave analysis: what next?

The current bullish swing started at 1266 and emerging into an impulse wave pattern. In the last update, where the chart below was used, the current spike was expected to be the 5th wave of this bullish run. 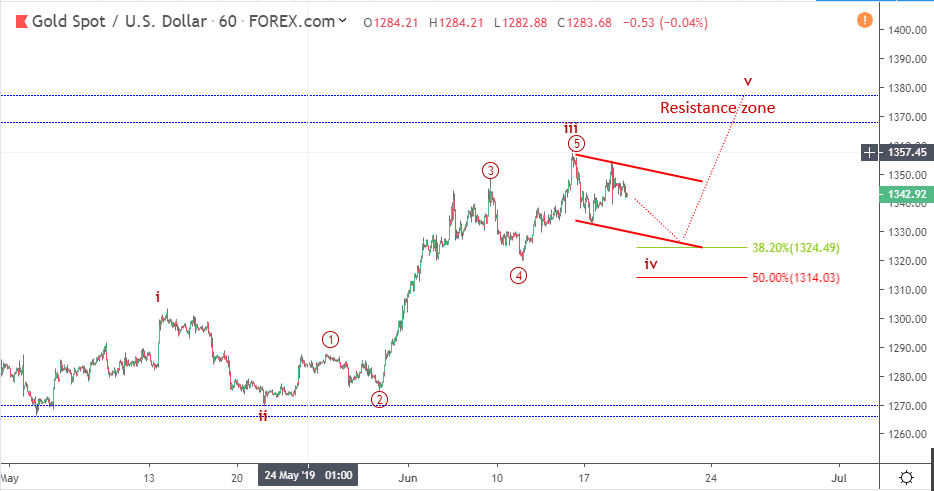 The last wave iv leg to 1324 didn’t happen as a result of quietness before the FOMC and the huge volatility after it. Price eventually surged above the resistance zone. The chart below shows how the wave count above is adjusted. 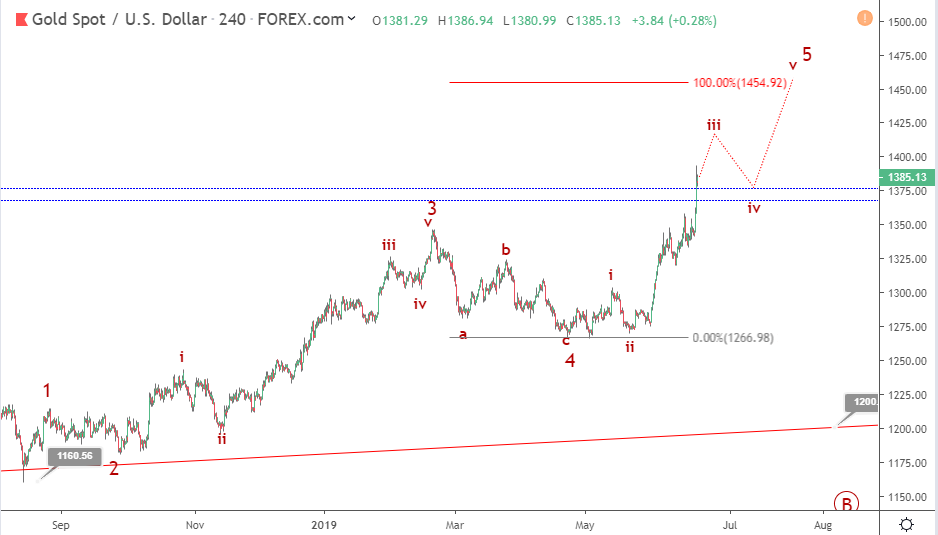