Gold hit 1250 last week to continue the bullish run from 1196. What next? The following give insights based on Elliott wave theory.

December 11, 2018 | AtoZ Markets – Since Mid-November, the prices of Gold have soared. In less than a month, the yellow metal has gained more than 4% to hit 1250 for the first time since July. The long run was on the back of a Dollar dip following recent Fed statements and the lingering US-China trade war. Price broke above the 1243 high that was held for more than 2 weeks. This week, price has not continued the bullish run so far. However, it has dropped from 1250 to 1246 as today’s US PPI data release comes to playmlater today.

The long term Gold forecast suggests a break above 1243 could lead to 1360 in the long run. The yearly trend is still bearish as price looked to complete a southward impulse wave that has dominated this year. The bearish scenario we pointed at in the last update assumed price completed the 4th wave of the year-long bearish impulse wave at 1243 with a double zigzag pattern. With the current break above this level, the double zigzag pattern doesn’t play anymore. Before finally giving up on the bulls, it’s important to consider the possibility of a triple zigzag pattern shown below. 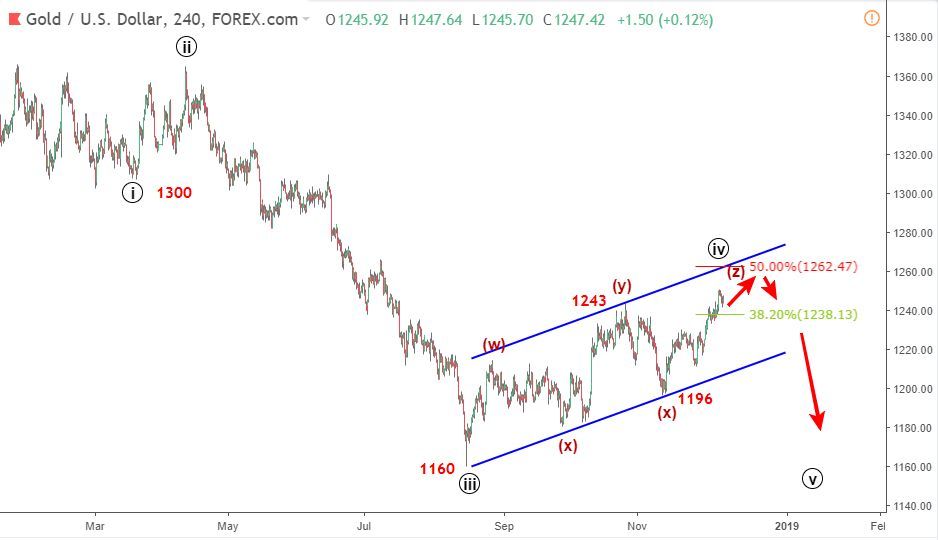 From January to August, price completed wave 1-3 of a potential bearish impulse wave. The 4th wave started from 1160 and is looking corrective. A triple zigzag wave 4 with possible reversal points at 1238 and 1262. Price bridged above 1238, thus might hit 1262 (50% wave 3 retracement). A dip back to 1200 and below is expected. If this plays out, we will most likely see Gold running to 1120 in year 2019 Q1. Alternatively, a bridge above 126x up to 1280 will support the bullish scenario in our long term Gold forecast.

In the previous updates, we expected a break above 1230 to lead to further rallies to 1255-1260. The chart below shows a more narrow zone of Fibonacci retracement and extensions. 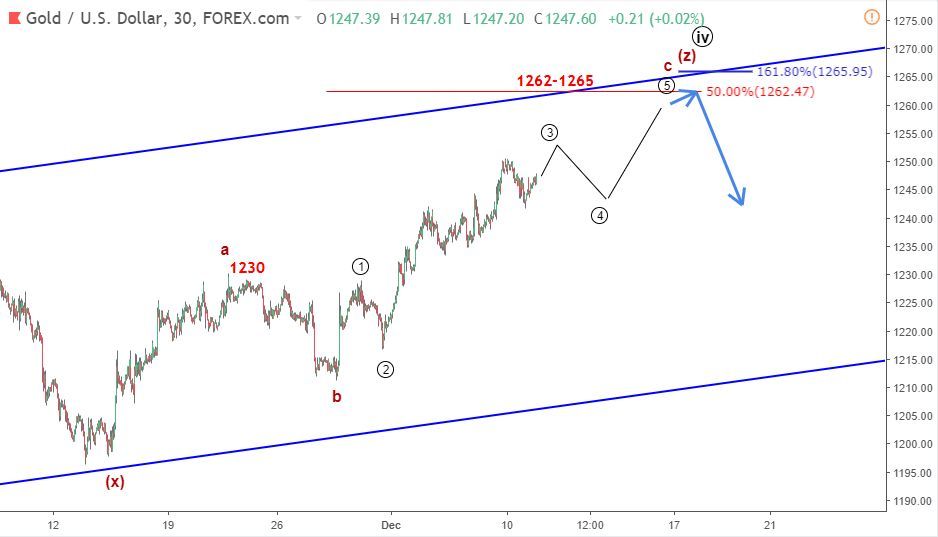 A zigzag pattern from wave (x)-1196, is expected to extend to 1262-1265 Fibonacci confluence zone. If the move results in an impulse wave instead, we will see a bridge of this zone after a small drop to 1250. The bearish trend will be confirmed if price breaks below 1230 otherwise the bulls are still in control.