Gold price edged lower for the second consecutive session on Monday, albeit managed to hold its neck above the key $1500 psychological mark.

19 August 2019 | SQUARED DIRECT – The price of gold registers another failure to cross Tuesday’s high, mainly due to trade and political news during today’s early session. The global risk-on sentiment extended after the US President Donald Trump said he doesn’t expect recession grabbed the headlines this morning.

The move stretched after China’s central bank signaled further moves towards free-floating currency by liberalizing interest rate changes for banks. Likely receding geopolitical tension between the UK and Iran, due to the release of an Iranian oil tanker by Gibraltar also adds to the latest pullback in safe-havens. Traders show little reaction to the US President’s trade negative comments as China’s response is still awaited while the Global Times portrayed a rosy picture of the world’s second-largest economy.

Gold prices failed to extend to the upside during Friday’s session, and instead came under fire and retreated from the highs as the divergence between the price and the momentum is showing its effect. The price of gold is currently challenging the $1506.02 support level as it trades around it with a declining momentum. We will be focusing on the downside with the $1494.36 support level on our watch. 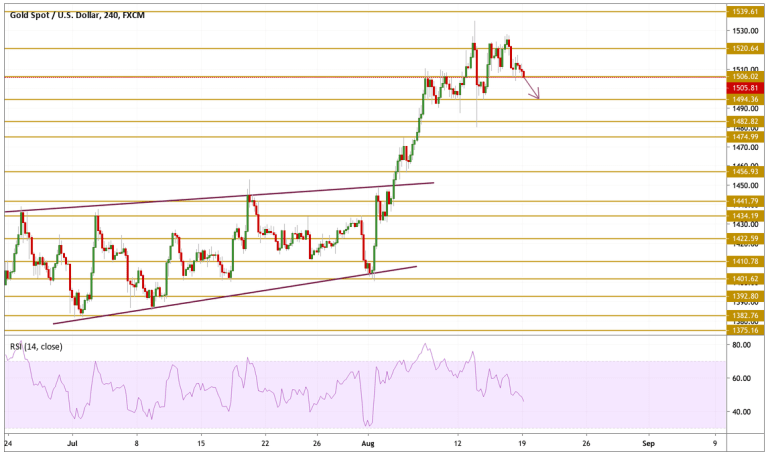 Fed: The Taper Will Have a Reduction–The Rates Will Not Go Up
Forex Crypto
Top 5 Forex Brokers
Top 5 Crypto Exchanges
Your subscription could not be saved. Please try again.
Thank you for subscribing. You will be the first to receive all the latest news, updates, and exclusive advice from the AtoZ Markets experts.
Everyone is reading
The Legal Battle Between the SEC and Ripple Continues
Binance Cancels Cryptocurrency Trading in Australia
Cryptocurrency Market-Experts Make New Predictions
close ×