Gold price continued moving higher, reaching a high of 1510. As of this writing, the XAUUSD pair is trading at the 1500 level, which is the highest level in more than a decade.

8 August 2019 | SQUARED DIRECT – The price of gold have been capped at fresh highs through the $1500 psychological level as investors bank, once again, on the idea that the Federal Reserve will cut interest rates again as soon as next month, sparking some relief in US stocks with benchmarks paring back most of the last session’s losses.

Gold prices continued to rally surging higher by more than 2.3% as concerns over the US-China trade war spilled over into surprise monetary policy moves. Three central banks cut rates more than expected yesterday which is a sign of weakening global growth. US yields tumbled, with the 30-year yield hitting an all-time low.

Chinese officials were on the tape saying that they believe they can outlast the US government with regard to the trade war. They are now willing to sit back and wait until the current tariffs begin to erode the US economy. The yuan was fixed weaker and it was the highest fix for USDCNY since 2008. PBOC officials reportedly told foreign firms earlier that the yuan won’t continue to weaken significantly.

Gold price continued to surge during yesterday’s session and reached a high of $1510.29 per ounce after picking up some momentum before recovering immediately below the $1500 level. The price is currently trading just below the 1500 level after reaching the 127.80% Fib retracement as we notice a big divergence between the momentum and the price. We will be focusing on the pullback with the $1482.82 support level on our watch. 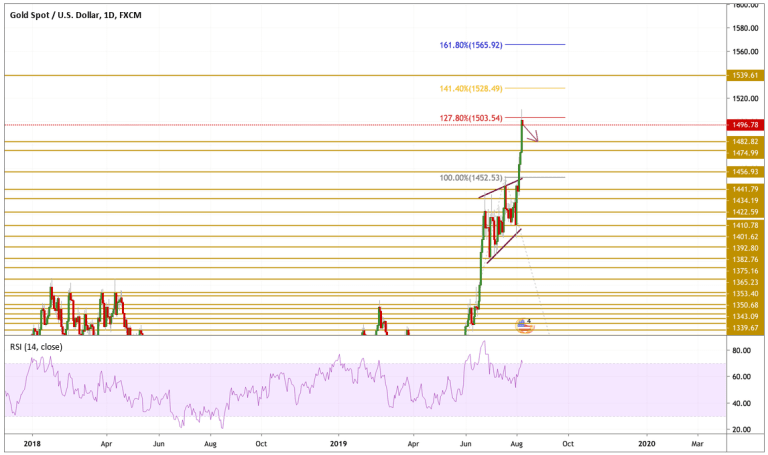 Fed: The Taper Will Have a Reduction–The Rates Will Not Go Up
Forex Crypto
Top 5 Forex Brokers
Top 5 Crypto Exchanges
Your subscription could not be saved. Please try again.
Thank you for subscribing. You will be the first to receive all the latest news, updates, and exclusive advice from the AtoZ Markets experts.
Everyone is reading
The Legal Battle Between the SEC and Ripple Continues
Cryptocurrency Market-Experts Make New Predictions
FCA Publishes New Strategy to Scams and High-Risk Products
close ×