Gold price declined initially towards the $1400 support zone before firing up by an impressive 48$ until this morning as the bulls stepped in hard.

2 August 2019 | SQUARED DIRECT – The troy ounce of the precious metal gained more than $40 in the second half of the session during yesterday’s session following US President Donald Trump’s tweets regarding the trade conflict with China. Trump tweeted that “trade talks are continuing, and during the talks the US will start, on September 1st, putting a small additional tariff of 10% on the remaining 300 billion dollars of goods and products coming from China into our country”.

The market reaction to Trump’s announcement triggered a flight-to-safety, ramping up the demand for traditional safe-havens. Additionally, major equity indexes in the US turned red on the headlines, confirming the sharp shift in the risk sentiment. Now the focus will remain on the trade war’s evolution and investors will also be watching closely the employment reports that are due later during the day.

Eyes on US jobs report

In the second half of the day, the US Bureau of Labor Statistics (BLS) will release its labour market report, which will include Nonfarm Payrolls (NFP), Unemployment Rate, Average Hourly Earnings, and Labor Force Participation figures. The market consensus points to the NFP edging lower to 164,000 from 224,000 in June.

Previewing the data, “We expect job creation in the manufacturing sector to mean-revert after the five-month high 17k increase in June,” said TD Securities analysts.

“We forecast employment in the services sector to moderate somewhat from its firm June print. All in, the household survey should show the unemployment rate remained steady at 3.7%, while we expect wages to rise 0.2% m/m, leaving the annual print unchanged at 3.1% in July.”

Gold price is currently trading just below the yearly highs above the $1441.79 resistance level with a strong momentum still far from the overbought zone. We expect a small breather to take place after the overextended move and then we will focus on the potential break above the upper band of the flag represented on the chart 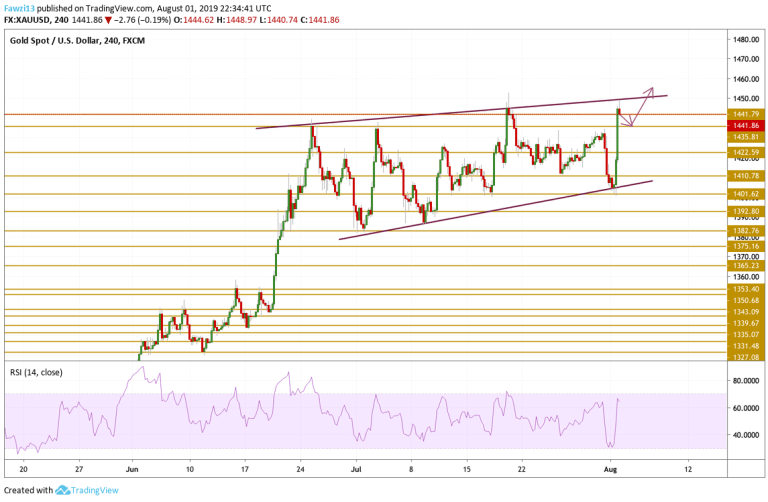