Gold headed for its worst month, as Federal Reserve Governor Jerome Powell signals imminent rate hike in December. What is next for bullion?

30 November, AtoZForex – Gold was headed for its largest monthly loss since June 2013. Analysts believe that this trend exists due to the expectations of the imminent rate hike by the Federal Reserve (Fed).

Gold headed for its worst month

While we are approaching the end of 2016, one of the crucial meetings is scheduled on the 12-13 of December. These days are going to be vital for the US economy stance, as the Fed policymakers will decide on the matter of the rate hike. Since US economic data is coming in strong, a number of analysts see a high chance of the December Fed rate hike. Meanwhile, gold prices were declining due to their sensitivity to the increases in the US interest rates.

The yellow metal lost $150 from the 9th of November post-election high of $1,337.40 per ounce. The bullion was hardly hit by the firming US dollar, which has surged on strong Treasury yields. That time, investors believed that Donald Trump’s planned policies would trigger more rapid pace of inflation. The managing partner at Hong Kong-based bullion services provider J. Rotbart & Co, Joshua Rotbart, has stated:

The USD on Wednesday was headed up on rising US debt yields. The economy of the US advanced faster than expected in the Q3, being pushed by strong consumer spending and an increase in soybean exports. 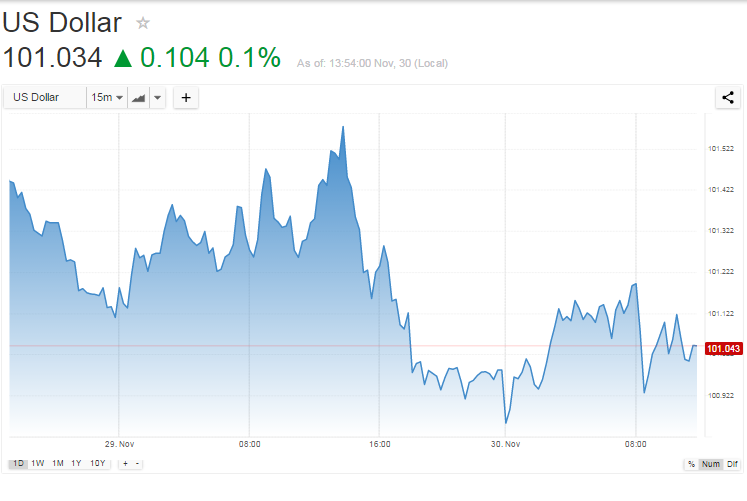 According to the Federal Reserve Governor Jerome Powell, the case for increasing the US interest rates has “clearly strengthened” since early November. This was perceived as a strong signal for the imminent rate hike.

As gold is highly sensitive to the hikes in interest rates, which boost the opportunity of holding non-yielding assets such as bullion while supporting the USD, in which it is priced.