Gold is moving around 1225 intraday resistance level formed last week after the huge upsurge. Will the bullish pressure drop? The following give insights based on Elliott wave theory.

Last week, Gold had a good time. After the bearish run from 1243 was rejected from going further at 1196, price has been in an upsurge gaining above 2.4% (+290 Pips) to hit 1225. 1225 was an intraday resistance level broken earlier this month. Since price hit 1225 last week, it has been tested twice this week already, making it a price level of interest.

Yesterday, Gold was a bit quiet but still maintained the bullish run after rallying back to 1225 from a 1217 dip. Today however, price is coming back from a 1221 dip in the Asian session to retest 1225 the third time in the last three trading days. Will the bullish move run through this time?

In today’s update, we will look at the long term Elliott wave analysis and forecast of Gold. The chart below has been my preferred wave count on the daily time frame. The year long bearish move (expected to complete an impulse wave) should complete a larger degree flat pattern. 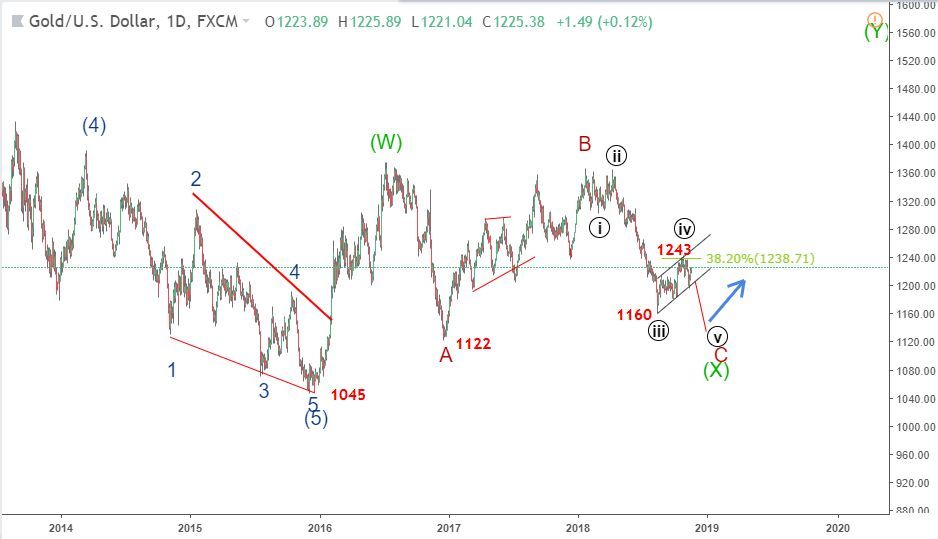 A dip below 1160 was expected to complete the second leg of the corrective pattern from 1046 (2015 low). The dip however, is expected to stay above 1122 to fit in perfectly. At 1243, the 4th wave of the year-long bearish impulse wave ended with a zigzag pattern well fit in a channel. Price however bounced off the lower boundary of the channel at 1196 instead of breaking below. The rally is going high and would invalidate this forecast if it goes above 1243. It’s good to have an alternative look in case the preferred scenario doesn’t work out. In today’s update, let’s look at an alternative Gold long term view. 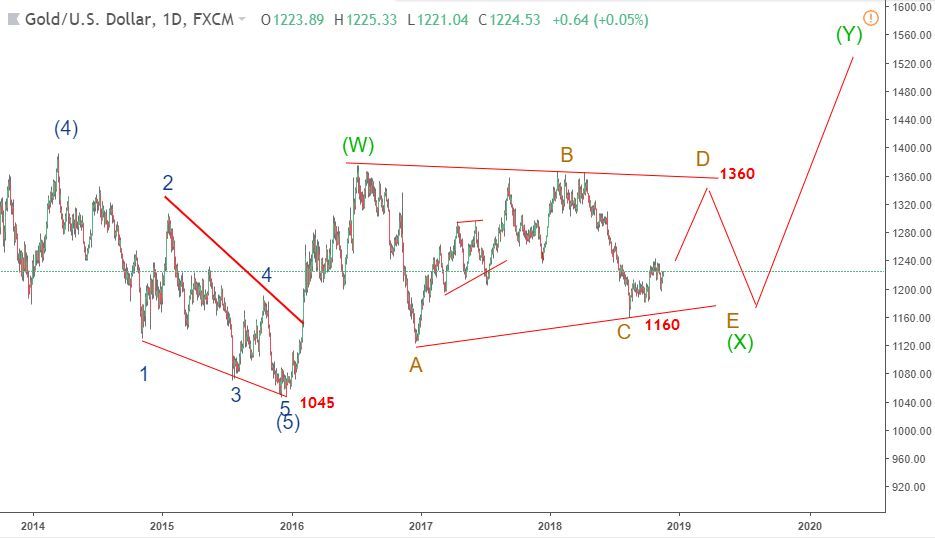 Instead of a flat, a triangle pattern is likely to complete the second leg of the long term bullish correction- Wave (X) in green. A break above 1243 would see us looking at a bullish Gold in most of year 2019 with target at 1360. If this scenario plays out, Gold will continue range-bound between 1360 and 1160 till year 2020 probably.