Get VIP Trading Signals Market Watch
Trade Now Your capital is at risk.
The yellow metal is now trading at multi-year highs following US-Iran war concerns. The following Gold Elliott wave analysis looks at the next target levels for the bullish trend.

January 06, 2020 | AtoZ Markets - The yellow commodity has resumed the long term bullish trend after spending the last half of 2019 largely bearish. The long-term bullish trend that resumed in December 2015 peaked at 1557 early in September 2019. However, optimistic trade talks set the commodity on a cautious bearish correction until mid-September. The safe-haven metal thereafter resumed the bullish trend after more fierce tensions arose between the US and Iran. Just before Christmas, the metal climbed above 1480 and then hit 1588 last week. With this move, Gold is among the biggest gainers in 2020 with nearly 5% after it hit its highest price since February/March 2003. The metal has now gained 9% since November 2019.

The major concern will weigh on the US-Iran war chants as the world worries about WW3. Iran has vowed to retaliate after its top army general and leader was killed in an airstrike sanctioned by President Trump. As expected, the White House has responded with more deadly reprisal threats on Iran and sanctions on its ally Iraq. Meanwhile, the United States House of Rep is about to vote this week to limit Trump's advance on Iran. As the crises rage with fears of war, the markets continue to panic with major stocks on the downside. Money now flows from risky assets to safe-haven assets like Gold. We will have to see whether the two parties will carry out their threats. Meanwhile, NATO will hold a general meeting on Monday to see how to curb this menace.

Prior to the current events, the Gold price was meant to advance further from a technical perspective for two major reasons. First, the trend in the last two years has been bullish. Second, the dip from 1557 was corrective. The chart below is the continuation of the long term wave forecast we have been using in the previous updates )Charting tools from TradingView). 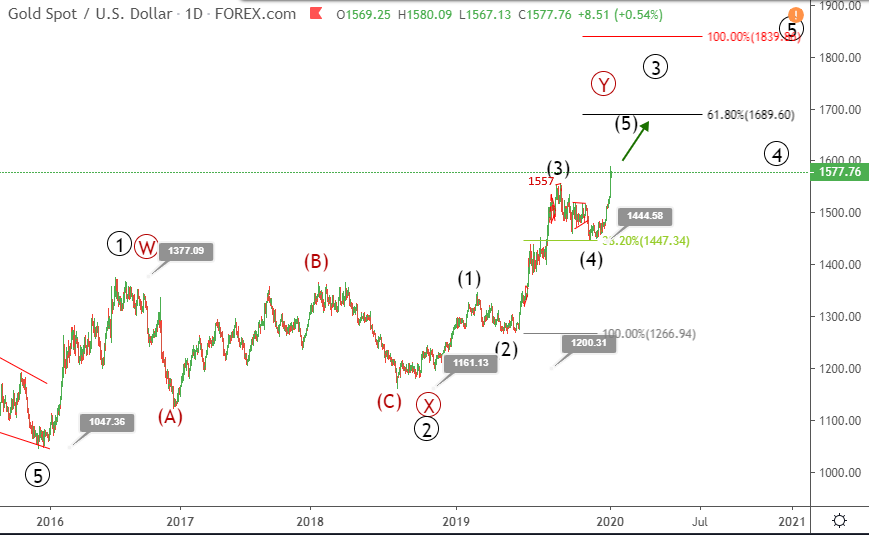 In the daily chart above, from 1047, a bearish cycle ended in December 2015 and the current bullish trend started in the following January. The wave count above shows the possibility of an impulse wave rally or bullish correction from 1047. However, the third leg of the move which started at 1160 to the current level suggests the impulse wave is more likely. Therefore, the Gold bullish trend should advance toward 1800 in the first half of 2020.

The 3rd primary wave started at 1160 and completed its 4th sub-wave at 1444 after a 38.2% Fibonacci retracement. Wave (5) should, therefore, extend to at least 1690 and even 1840 (61.8% and 100% Fibonacci extension of (1)-(3) from (4) respectively). In the last update, we looked at the internal formation of wave (4). There should be minor pullbacks but the market is very bullish from both technical and fundamental perspectives. The effect of the US-Iran crises is expected to create more tensions across the markets and so the demand for Gold will increase steadily.

Forex and Cryptocurrencies Forecast for August 22 - 26, 2022
Broker of the month!