After two weeks of indecisive move, Gold has completed a reversal pattern slightly above 1240 price level. Currently at 1231, will it dip more?

Gold made a good effort to break above 1238-1240 resistance zone on Friday. However, the breakout wasn't significant as price quickly dropped back to 1234 leaving a a familiar reversal pattern at 1243. Price remain unchanged around 1234-1235 in the Asian session. However at the beginning of the London session, price dropped to 1231 after a slight bearish breakout of 1232 intraday support. Technically, the bears might take control in the first half of this week. Unless a fast move happens above 1243, price will go down further to 1225, 1218 and even 1200.

In the past updates, we believed the current rally might be the last leg of the 4th wave of the year-long bearish impulse wave. At 1238-1240, we expected the 4th wave corrective pattern to have completed. However, the bearish expectation hinged toward a significant breakout below 1225-1227 price zone. In the last update, we added an alternative scenario which expected further price rallies if it breaks above 1240 significantly. Price broke above 1240 with one wild hourly candlestick/bar but the next candles/bars fell sharply below 1240. The breakout wasn't significant as price didn't stay one or two candles above. The chart below shows a different reversal pattern. 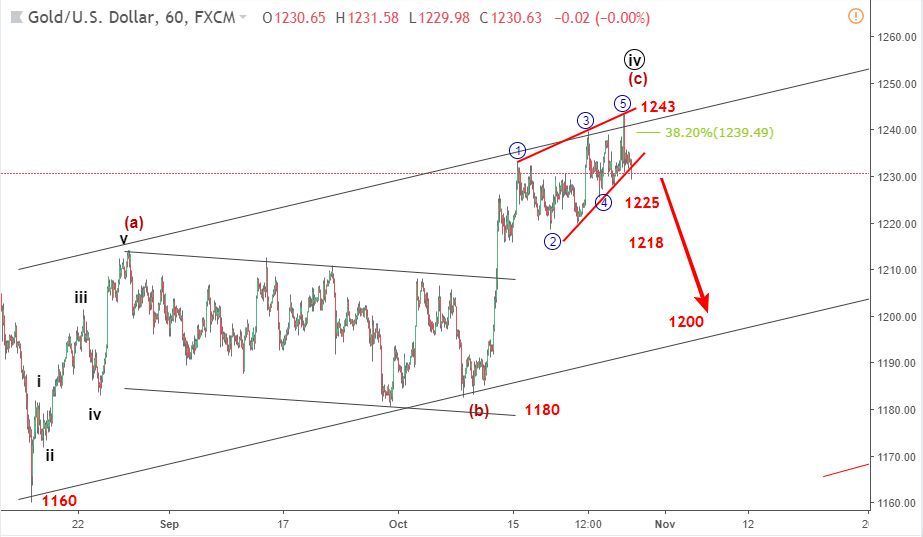 The 4th wave started at 1160 in mid-August. At 1243, an ending diagonal pattern has completed. Ending diagonal patterns are reversal patterns often seen at the top of a trend (Impulse wave) or a correction. Price is currently breaking below the diagonal support line. If price dips as expected, it should drop below intraday support levels at 1225 and 1218. If price hits and breaks below 1200 handle with a trendy move, we may say the 4th wave has ended. However, if the dip is corrective and stays above 1208, more upside moves might follow.

Do you have an alternative to this technical forecast? Please share with us in the comment box below.

Markets After the Fed’s Decisions
Forex Crypto
Top 5 Forex Brokers
Top 5 Crypto Exchanges
Your subscription could not be saved. Please try again.
Thank you for subscribing. You will be the first to receive all the latest news, updates, and exclusive advice from the AtoZ Markets experts.
Everyone is reading
SEC Lawsuit Against Ripple May Drag On Until 2022
Ethereum Facing Support Around $2,300 Price Area - Will Strike Upward?
Danske Bank Rejects Cryptocurrency Trading
close ×