After being rejected at 1240s, Gold has dropped more than 250 Pips in less than 4 trading days. To continue the year-long bearish trend, Gold price has broken below 1225 and 1218 intraday support level. Will the dip continue?

October 2018 | AtoZMarkets – Gold has lost more than 2% in the last four trading days. The bearish move from 1243 was highly expected from Elliott wave theory's perspective. Price had just completed the 4th wave of a bearish impulse wave at 1243. The 5th wave therefore, will be expected to continue bearish far below 1200 handle. This week, price broke below 1225 and 1218 support levels. It still has to break below 1208 and 1200 which are the next support levels in this bearish journey. Meanwhile, there might be a bullish correction around 1200 before the bearish trend resumes. 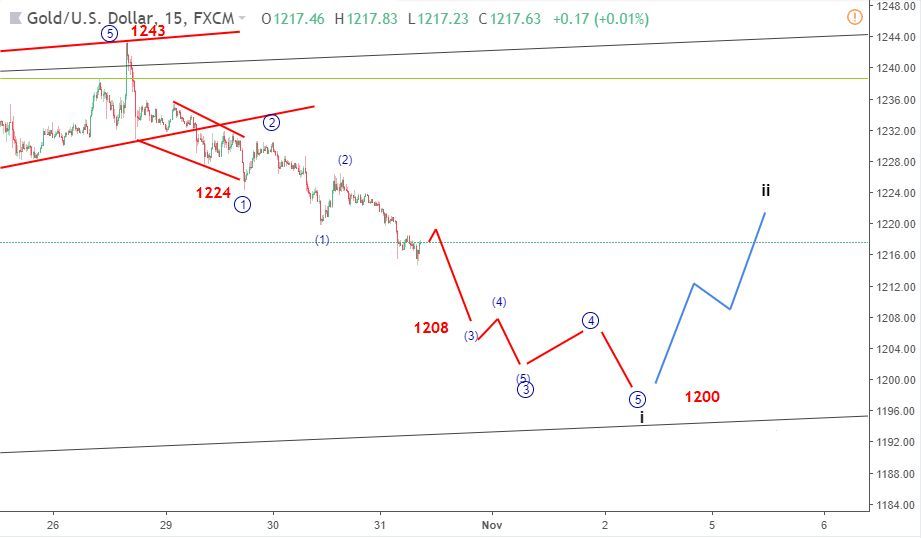 The chart above shows one of many ways price could move. At this point, there are many possible ways to label the chart above. As price progresses, the correct wave count will emerge. Price will likely dip to 1200 (base of the wave 4 channel) before starting the second sub-wave (a corrective bounce). In as much as price holds below 1243, the bearish trend should continue.

Markets After the Fed’s Decisions
Forex Crypto
Top 5 Forex Brokers
Top 5 Crypto Exchanges
Your subscription could not be saved. Please try again.
Thank you for subscribing. You will be the first to receive all the latest news, updates, and exclusive advice from the AtoZ Markets experts.
Everyone is reading
SEC Lawsuit Against Ripple May Drag On Until 2022
Ethereum Facing Support Around $2,300 Price Area - Will Strike Upward?
Danske Bank Rejects Cryptocurrency Trading
close ×