Gold is trading quietly above 1520 at the start of the week. The following looks at what could happen next based on the Elliott wave theory.

September 02, 2019 | AtoZ Markets – Last week, the Gold retreated from the massive rally to 1555. On Friday, it hit 1516 then followed with a spike to 1534 as the start of this week. Currently, the metal has dipped to 1521 where it consolidates, looking for a trigger for the next big move. The predominant trend is bullish.

The yellow metal is one of the best performing monetary assets in 2019 so far. Due to its safe-haven nature, it has benefitted from the US-China trade war. The USD staggers while the major stock market plummets with highlights of the two world economic powers spanking each other with fresh tariffs. The odds favor the continuation of the bullish trend due to the low confidence that there will be a resolution soon.

Price currently hangs between 1550 and 1500 important levels. A breach below 1500 might eventually lead to the 1480 and 1451 support levels. If the price breaks above 1555, then the 1600 handle will be the next bullish target. Before 1555, there is an intraday resistance level at 1534 which short-term traders will look forward to. Currently, an important bullish reversal pattern is emerging with the base at 1518 and neckline (breakout point) at 1534.

The bullish trend is still intact. It thus seems the best way to look at Gold is by buying the dips as the trend is looking unbroken. Our Elliott wave analysis also supports further advances toward 1600 if the price stays above 1500. In the last update, the chart below was used. 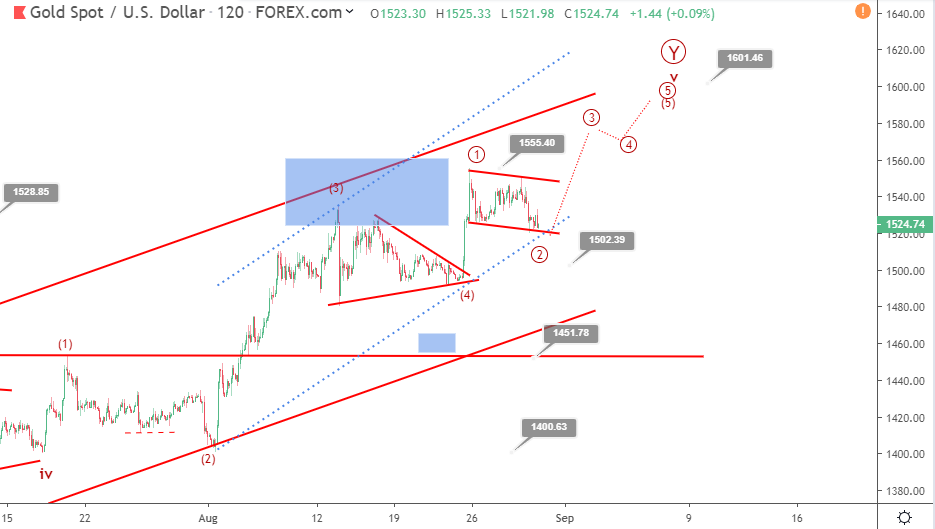 After the 4th wave triangle ended at 1490, we started the 5th wave which could be an impulse wave (with an extension toward 1600) or a shorter ending diagonal pattern. If Wave 1-2 (circled) hold without a break below 1500, we should see a break above 1550. The new chart below shows the sub-waves of wave 2 (circled) and reversal chart pattern emerging above 1516. 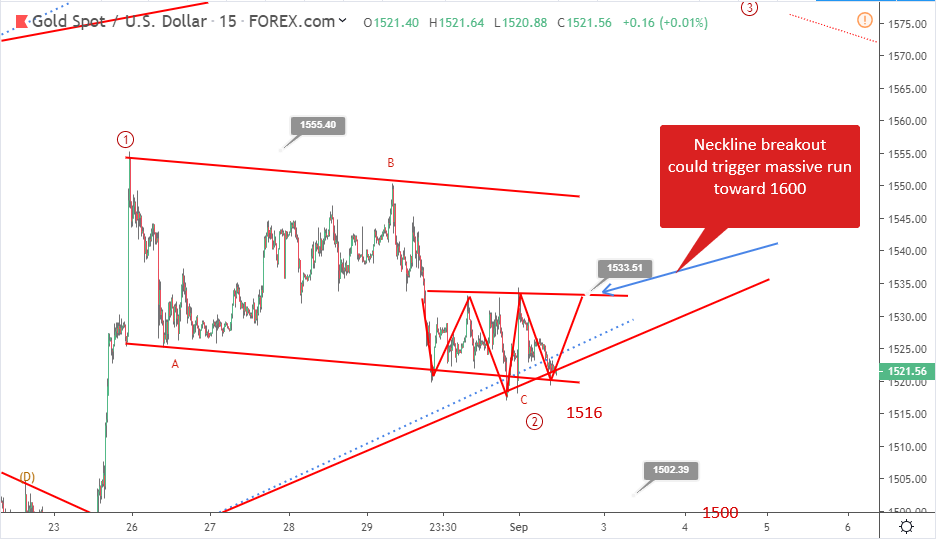 A head and shoulder reversal pattern is emerging with a neckline at 1533-1534. A break above 1533 will very much likely lead to further rally toward the 1600 handle.

Tags Elliott wave analysis EURUSD analysis
Forex Crypto
Top 5 Forex Brokers
Top 5 Crypto Exchanges
Your subscription could not be saved. Please try again.
Thank you for subscribing. You will be the first to receive all the latest news, updates, and exclusive advice from the AtoZ Markets experts.
Everyone is reading
Is Forex Trading Halal or Haram in Islam?
Top 5 Forex MT5 Indicators for 2021 you should try
Top 5 cryptocurrencies 2021 | Best Cryptocurrency To Invest
close ×