Gold remains sideways but with short-term bearish move possibilities. The following technical analysis is based on the Elliott wave theory.

July 29, 2019 | AtoZ Markets – The yellow metal has been sideways since late last week. After the weekly bottom at 1411, the precious metal rallied to 1425 before returning below 1420. This week so far, it has been sideways and will require a quick bearish break to continue to 1400 or below. Just at the start of the New York session today, there was a bearish break below the 1416-1417 intraday support zone. However, price didn’t stay below 1416 for many minutes but quickly rallied to 1420 thereby returning the intraday market rhythm confined in a narrow trading range.

Gold is dollar-denominated and so USD price activities often affect the price of the commodity both in the long and short term. Later this week, on Wednesday, the Fed Reserve Bank will meet to reveal the outcome of their votes on the interest rates and their general economic forecasts for the coming months. Rate cuts are expected Two days after, the US employment data a.k.a Non-farm Payroll will be released. The market expects 160k additional jobs – significantly lower than the 224k previously released.

Gold hit 1452 earlier in July to mark its highest in many years. The bullish impulse wave from 1160 is clearly nearing its end. However, it’s not very clear whether one more rally above 1452 will happen or price will drop fast below the 1375-1368 support zone. In the last update, we talked about two major scenarios. The chart below expected a dip below 1400 to trigger the continuation of the bearish correction from 1452. 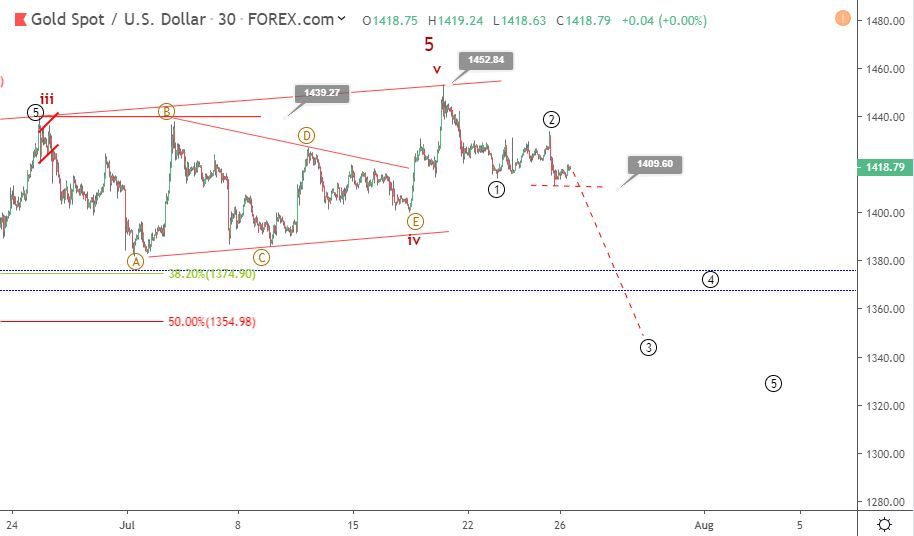 Alternatively, if the price is supported at 1400, one more leg above 1452 to complete an ending diagonal 5th wave is very much possible. At the moment, price continues within the range. The short term direction still points downside as the chart below shows. 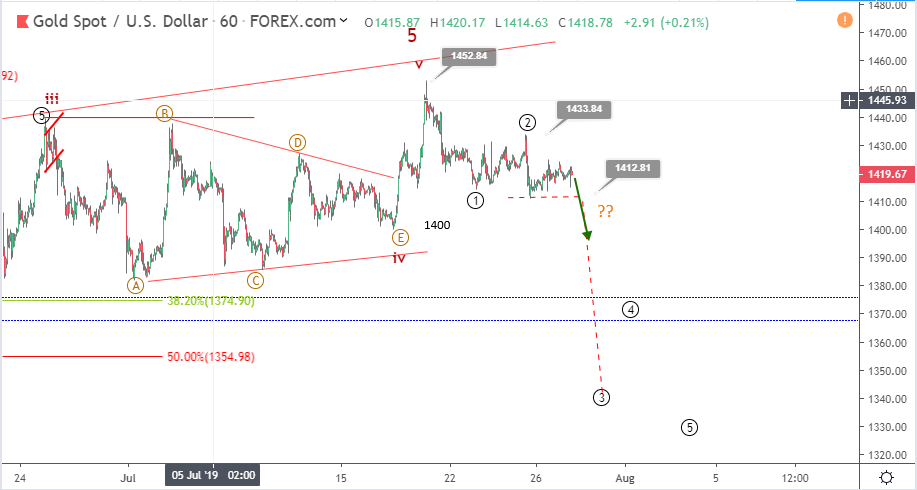 A break below 1412 will lead to further fall to the 1400 psychological level. If the price drops below 1400, the diagonal possibility will be threatened and leave us with this scenario as the most viable. However, if 1400 and prices around it support the price, a further push toward 1475 is highly likely.

Tags Elliott wave analysis Gold analysis
Forex Crypto
Top 5 Forex Brokers
Top 5 Crypto Exchanges
Your subscription could not be saved. Please try again.
Thank you for subscribing. You will be the first to receive all the latest news, updates, and exclusive advice from the AtoZ Markets experts.
Everyone is reading
Is Forex Trading Halal or Haram in Islam?
Top 5 Forex MT5 Indicators for 2021 you should try
Top 5 cryptocurrencies 2021 | Best Cryptocurrency To Invest
close ×