Get VIP Trading Signals Market Watch
Trade Now Your capital is at risk.
November 27, 2018 | AtoZ Markets - Gold is still under bearish pressure after being held below 1229-1230 price resistance zone. Will a dip to 1210-1200 follow? The following give insights based on Elliott Wave theory.

Gold turned downside last week after completing a familiar price reversal pattern. A zigzag pattern from 1196 ended at 1230 and price has since fallen. At the end of this pattern, there was a clear expanding diagonal pattern which increased the possibilities of a price fall. According to fundamental technical analysis, a correction is often followed by the continuation of the trend. Elliott wave theory helps to identify corrections and their position in a trend.

Gold's long term forecast looks at two clear possibilities. A price drop below 1200 will most likely see the year-long bearish trend continue below 1160 but a break above 1243 would invalidate the bearish scenario and set it off to 1360. In the short term, the rejection of 1230 after the zigzag pattern meant that price should at least make a 3-wave corrective drop to 1212-1210. Last week ended with a drop to 1219. Yesterday, however, price retested the bearish resolve with a push to 1227 but was resisted. Today, price has dropped back to 1220 and looks very much likely to continue. Aside the reversal patterns discussed in the last update, there is yet another reason. 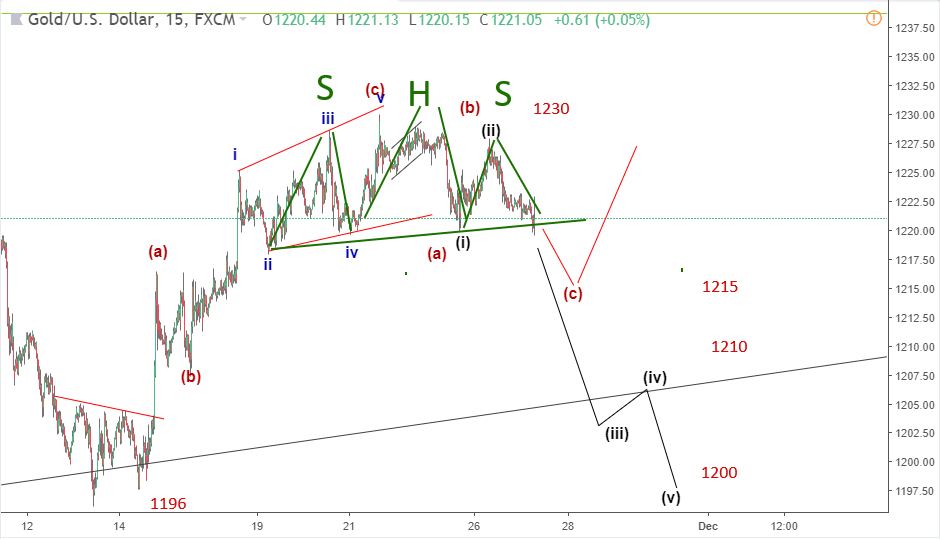 The chart above shows a 'head and shoulder' reversal chart pattern which also gives a bearish signal. A zigzag pattern completed with an expanding diagonal pattern. Price, on its way down, also completes a head and shoulder pattern. from technical analysis perspective, Gold is bearish and should continue to at least 1212-1210.. A drop below 1200 would turn the long term scenario downside again with a possible hit below 1150.

Should you trade gold on your own at all?

Before you start trading gold, you'll want to read this.