Gold price has stayed almost lifeless after the FOMC. The following looks at what could happen next based on the Elliott wave theory.

August 22, 2019 | AtoZ Markets – Gold was trapped in a narrow range prior to the FOMC meeting on Wednesday. During and after the meeting, the price movement of the commodity turned even slower. Currently, the yellow metal is priced at $1,497 – just a little below the 1500 handle. The range has an upper boundary at 1535 and a lower boundary at 1480. The price will have to break out of any of these levels to determine its next near-term direction.

The Fed meeting on Wednesday came disappointing. Prior to the meeting, there were expectations of a series of interest rate cuts coming before the year ends. However, the Fed did not approve of these market concerns. The economic calendar is very light today besides the Jackson Hole Central Bankers’ meeting which is set to hold on Thursday and Friday.

Gold dropped from 1503 to 1496 thereby starting today bearish. The sideways move is getting narrower. To the upside, there is a strong resistance level at 1535 which if breached might see a touch of the 1550 level. To the downside, 1480 is the nearest support level. A break below 1480 should lead to a touch of the 1451 support level.

Price is emerging into a bullish contracting triangle pattern after staying sideways since August 13. The triangle pattern is not yet complete. Price might stay a little longer in the range before finally breaking out. In the last update, the chart below was used. 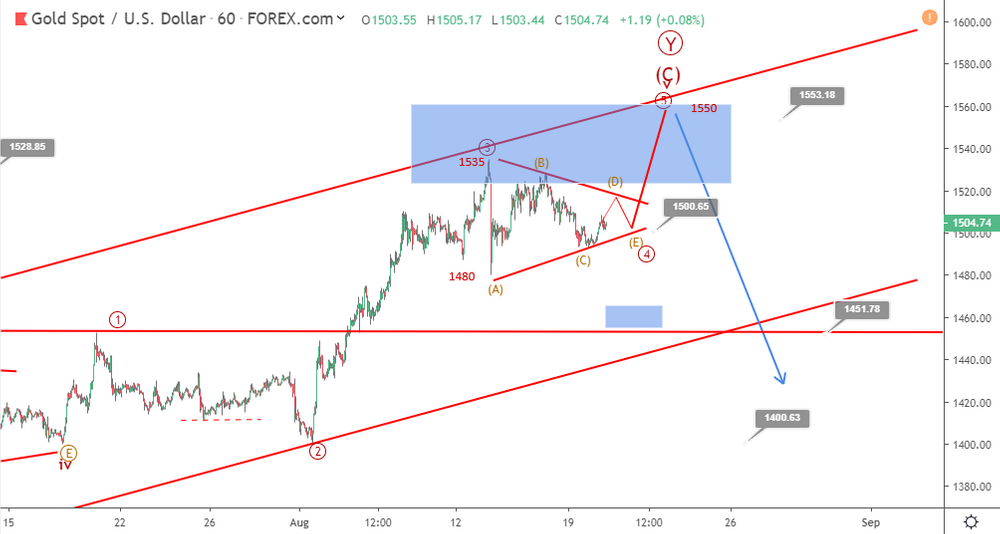 The bullish impulse wave since August 2018 is close to completion. We are now at the 4th sub-wave of the 5th wave of the impulse wave pattern. The new chart below shows that the triangle is not yet complete. 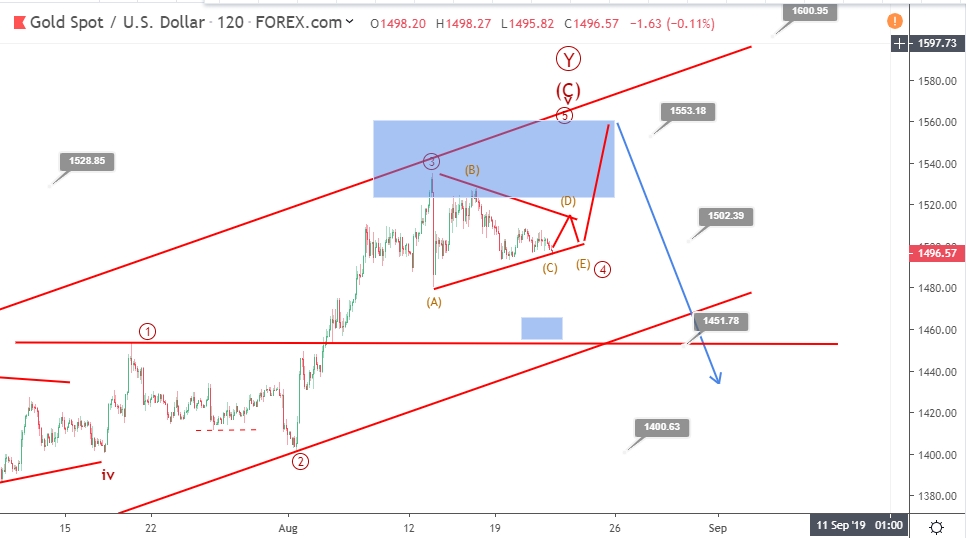 The chart above shows Gold was very quiet in most of the last 24 hours. The triangle pattern is still very much likely. A bullish breakout to 1550 or prices slightly higher could happen to complete the bullish impulse wave. A 3-wave bearish correction is expected to 1400 afterwards.