Gold is retreating below 1500 again after the bullish momentum drops. The following looks at what could happen next based on the Elliott wave theory.

August 19, 2019 | AtoZ Markets – Gold dropped lower throughout the European session on Monday to the 1500 handle. The dip means that the yellow metal is trading at its lowest price in four days. The market is relieved from the US-China trade conflicts after President Trump stated that negotiation is back.

After dropping from 1535 to 1480, Gold has stayed in-between these two levels making a corrective dip from a technical perspective. Price still remains in the bullish territory but very close to a possible bearish reversal. The precious metal has benefitted from the uncertainties in the market. As a safe-haven asset, periods like this trigger an increasing demand for Gold. Eventually, Gold hit its highest price since early 2013. Meanwhile, with the talks resuming and a possible short-term or long-term agreement made, the demand for Gold might drop significantly. The market will look forward to Wednesday’s important FOMC policy meeting minutes for more clues.

From the perspective of the Elliott wave theory, the current dip is the last correction before the bullish trend finally bends. In the last update, the chart below was used. 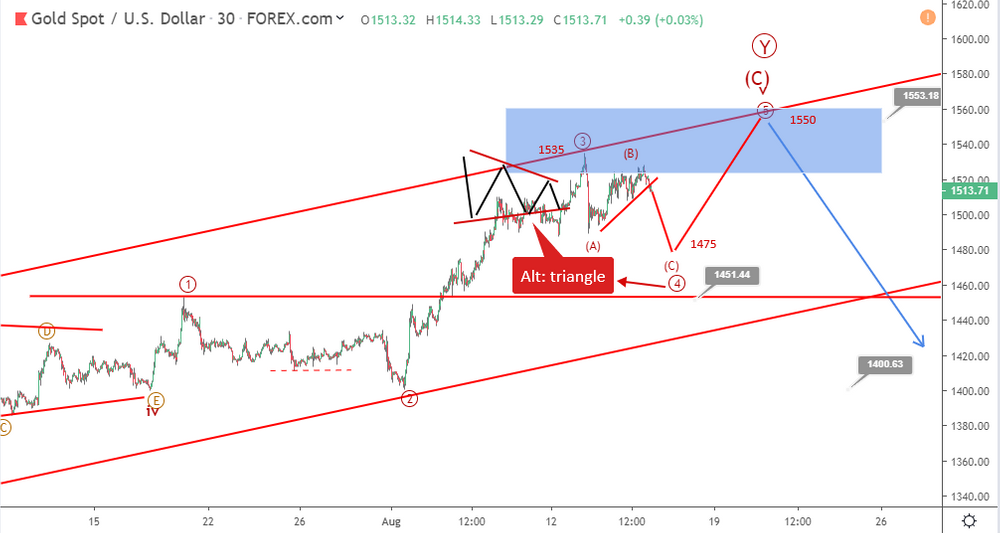 Wave 4 (circled) of wave v of (C) was in motion. If the price swung well, we expected a zigzag or complex zigzag pattern. If it went sideways, a triangle would suffice. Since this update, the metal has been dropping and now close to the 1480 low to complete what could end up as a zigzag pattern. The chart below supports a zigzag wave 4 (circled). 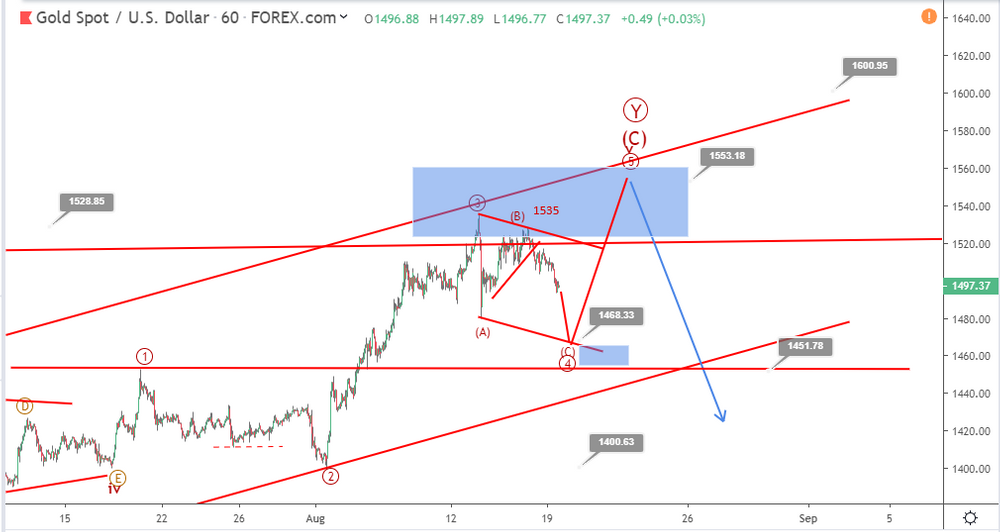 While the scenario above is looking more likely, the triangle alternative is not out of the picture yet. The wave 4 (circled) dip is expected to stay above 1451. We have the 1455-1465 support zone at the price reversal zone for wave 5 (circled). Unless a fast dip below 1451 happens, the yellow metal might take one more leg upside before it finally slumps toward 1400.