Gold advances gradually to 1430 ahead of today’s Fed’s rate decisions. The following technical analysis is based on the Elliott wave theory.

July 31, 2019 | AtoZ Markets – The precious yellow metal rallied from 1420 to 1430 this week with low volatility. Investors and traders are perhaps wary of today’s FOMC meeting. The market expects a rate cut from the Fed but the tone of the statements and speech during the press conference might be the real price trigger. Gold meanwhile remains bullish in the long-term with a short term retracement from 1452. It remains to be seen whether the correction will get deeper or the trend will resume.

The Fed fund rate is expected to be reduced by 0.25% to a target range of 2.00%-2.25%. This would be the first rate cut since December 2008. What is surprising about this decision is that the US economy is very much healthy. Rising wages, big consumer spending, booming labor market, a lower rate of unemployment, lower inflation rate, record-high stock markets, a dominant Dollar and other positive economic indicators have put US economy in the best conditions in a decade. It appears a rate cut is not needed at this time to solve any problem. The intent of the Fed is not yet clear. Meanwhile, it seems the market will be priced in. The Fed chairman’s speeches afterwards will most likely be the real market trigger.

In the last two updates, we have maintained two positive scenarios for Gold. Price seems to be in the final stages of the massive rally from 1160 which started in August 2018. The new chart below is an update of what we had in the last update. 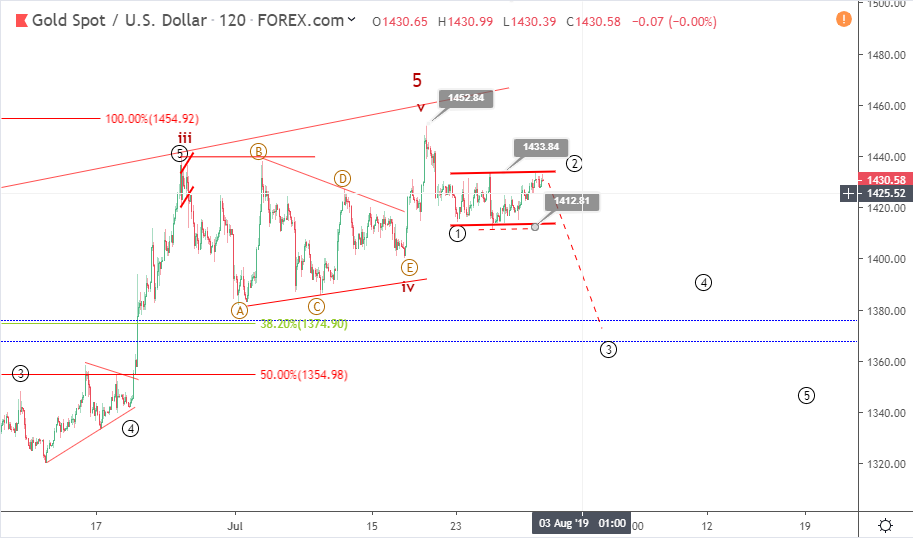 This scenario suggests the 5th wave has ended at 1452 and a 5-wave dip toward 1300 could follow or at least a 3-wave bearish correction to the 1275-1368 support zone. A break below 1412 should trigger this scenario. The chart below shows the alternative scenario. 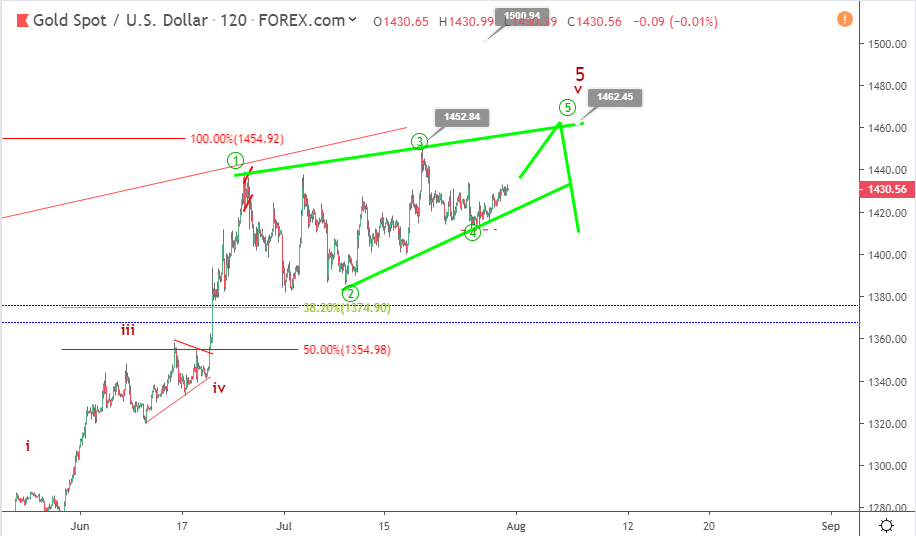 The current rally could continue to price levels around 1460 to complete an ending diagonal wave v of 5 before the bearish correction starts. Today’s Fed statement will be a huge trigger before Friday’s US employment data.

Tags Elliott wave analysis Gold analysis
Forex Crypto
Top 5 Forex Brokers
Top 5 Crypto Exchanges
Your subscription could not be saved. Please try again.
Thank you for subscribing. You will be the first to receive all the latest news, updates, and exclusive advice from the AtoZ Markets experts.
Everyone is reading
Is Forex Trading Halal or Haram in Islam?
Top 5 cryptocurrencies 2021 | Best Cryptocurrency To Invest
How to Setup Monero Mining in 2021?
close ×