Gold has extended the recent sell-off below 1285 to hit its lowest price in over one week. The following share insights based on Elliott wave theory.

April 16, 2019, AtoZ Markets - The precious metal started in April with a big upsurge to 1310 but would soon be followed by another wave of sell-offs following risks associated with the US-China trade deal. The trade deal optimism has increased and mounting pressure on the Dollar-denominated commodity. The last FOMC had little impact but the Treasury bond yields have enjoyed a moderate upbeat which in effect took some bullish flow from the precious metal.

Gold is close to the 1280 support level. Since January, the price has been supported above 1275-1290 support zone three times. Price has entered into this zone again and it remains to be seen if it will bounce off once again or bridge below to make a new low in 2019. Price has not dropped below 1275 in 2019. Will it happen this time around?

Fundamental events to watch out for

What drives the daily and intraday moves in Gold are more than the Forex economic calendars. Correlation with the Dollar, USDJPY and the Treasury bond yields is an important factor to consider as well. Gold is a dollar-denominated zero-yielding commodity. The only high impact economic releases from the United States include the speech of the FOMC member Bullard on Wednesday. On Thursday, the US core retail sales data will be released and the US permits data on Friday.

Gold is making a corrective dip from 1346 since late February. Wave (a)-(b) have completed at 1280 and 1325 respectively. Early April 1280 bounce suggested wave (b) might extend with another leg to retest 1325 but the current sell-off suggests otherwise. A break below 1280 will eventually happen and the bearish target of 1250-1260 will happen. The chart below shows the new update. 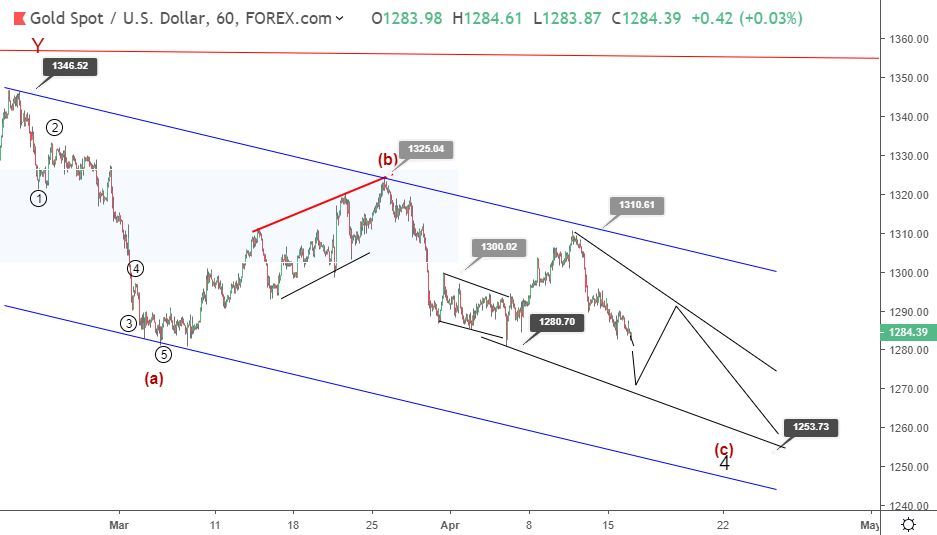