Gold has resumed the minor bearish correction after it failed to hit 1300. Will price drop below 1270? The following give insights based on Elliott wave theory.

January 08, 2019 | AtoZ Markets - After making a big correction close to 1298, the yellow metal dropped in the Asian session. Currently the precious commodity exchanges for $1283. In the last 5 months, it has gained 12% after adding 1400 Pips since mid-August 2018. There have been minor pullbacks in the journey but the bullish trend has overcome anyway. The first bullish target from technical perspective lies at 1360. That's an additional 6.5% again and more than 800 pips upside. The rally from 1160 has the initial quality of an impulse wave - the swings are not overlapping. However, there is an alternative corrective pattern that could also play out. This corrective pattern also has this quality as an impulse wave.

From the long term perspective, there are two possibilities illustrated in the chart below used on the 3rd January update. 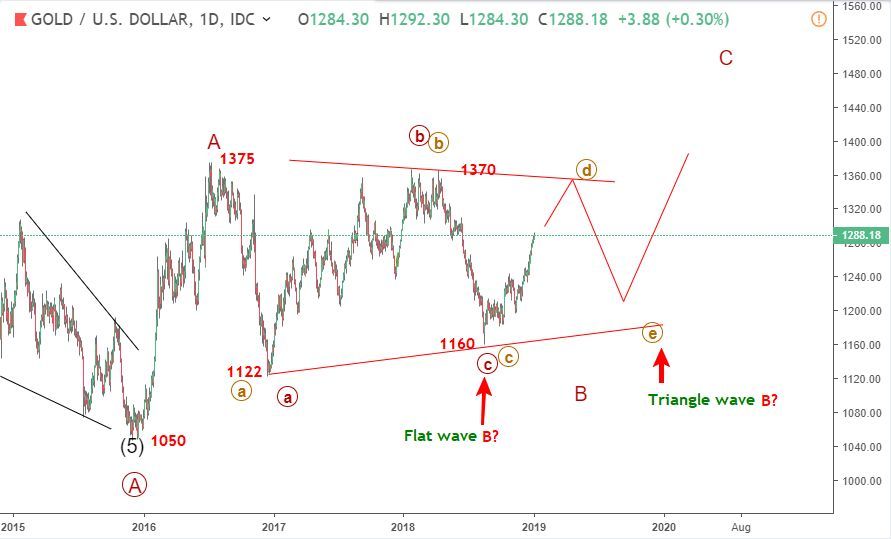 From the chart above, it was clear that Gold completed an impulse wave at 1050 in 2016 and the 2-year rally that followed is expected to complete a 3-wave bullish correction which might extend to 1500. The first leg of this correction ended at 1375- wave A, but the 2nd leg is not yet clear as there are two possibilities. First, a 'Flat pattern' wave B ending at 1160 with a resultant impulse wave bullish breakout above 1370. Alternatively, a triangle pattern could surface to complete wave B. This means that after the current rally hits 1360, we would see another bearish leg back to 1200. To distinguish between these two, the wave pattern emerging on the current bullish leg is important. If it completes an impulse wave, the first scenario should play out. If corrective, the second will play out. We will look at these two possibilities. 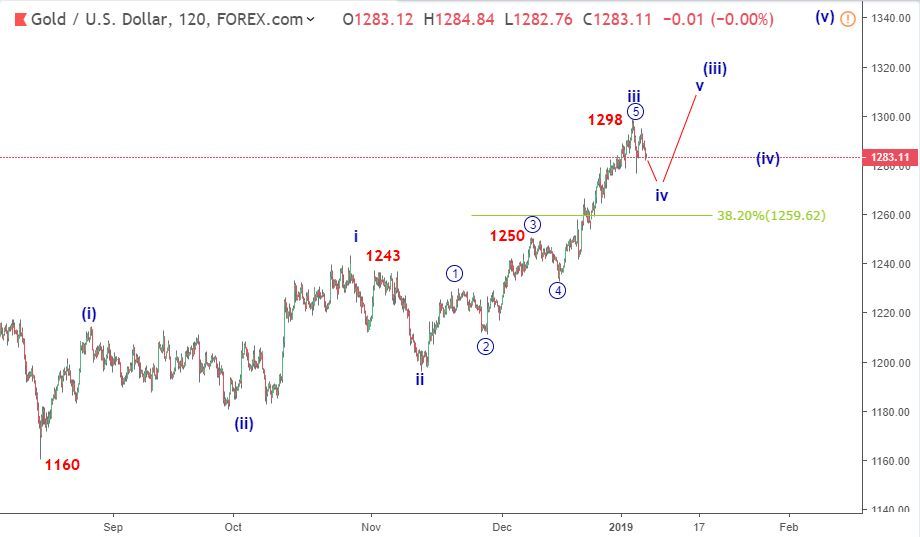 This scenario fits with the long term 'Flat pattern' long term outlook. It's the continuation of yesterday's update where we forecast that ''price might take one more leg downside below 1277 to complete wave iv before it resumes upside''. The dip fits with this scenario well. However, it should be limited above 1250. 1259-1260 is the ideal support zone for wave iv before price resumes upside to complete wave v of (iii). 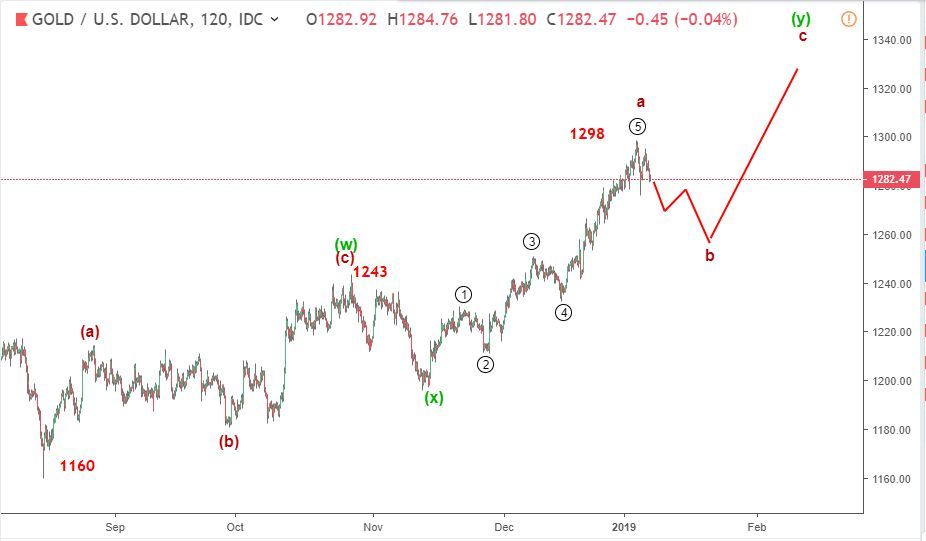 The second scenario above has similar forecast to the 1st scenario but different long term interpretations. If the long term wave B would be a triangle, its wave D should be corrective. The chart above prints a double zigzag pattern which could extend up to 1360 after a dip to 1250-1260. This scenario permits the current dip to go much deeper than the 1st scenario. 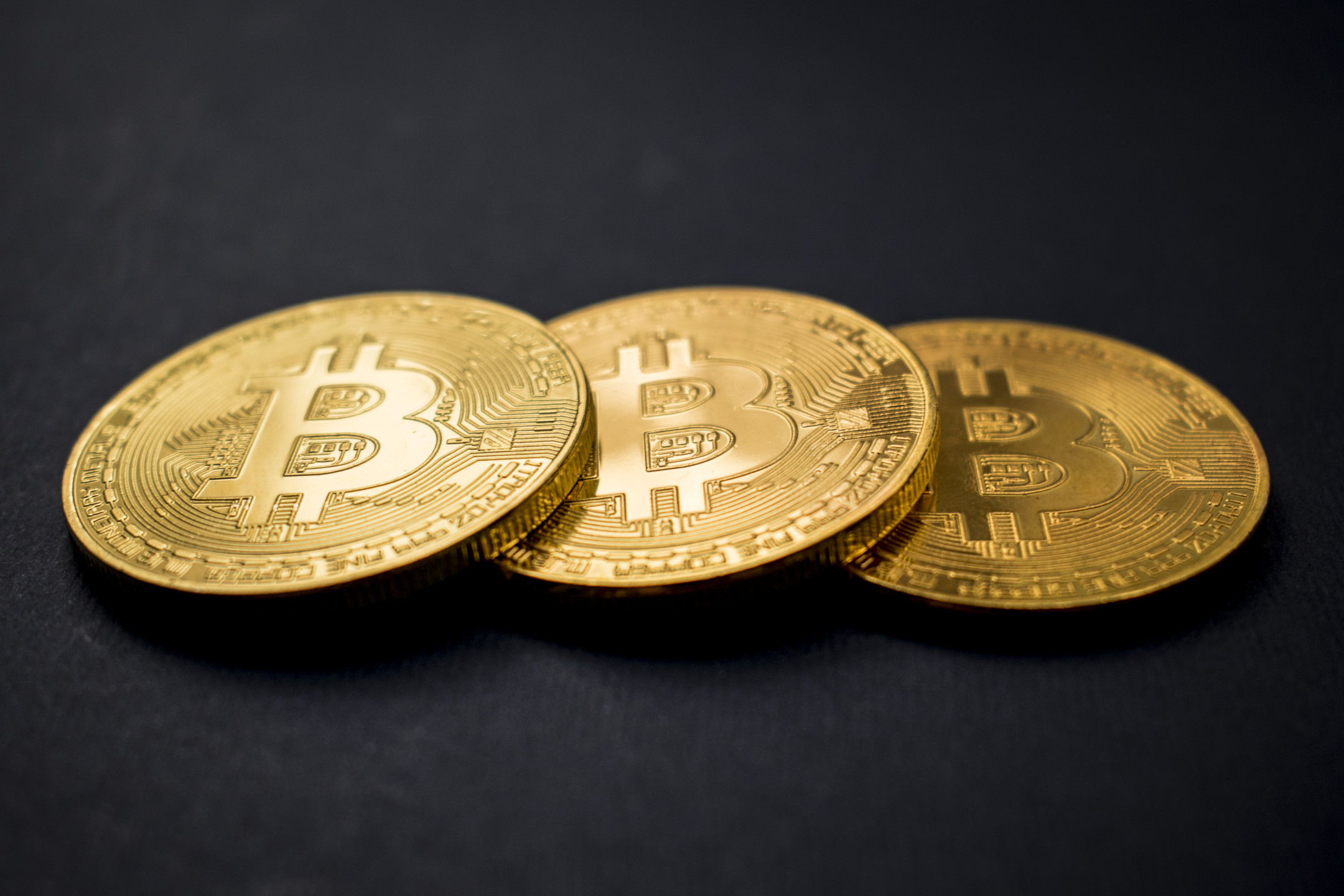