Gold rallies back above 1400 after a big drop to 1387. The following technical insight is based on the Elliott wave theory.

July 08, 2019 | AtoZ Markets – Last week ended bearish for Gold after it had a massive run-up to challenge the 1439 resistance level. The greenback came hugely positive on Friday after a massively positive June NFP data. The dollar-denominated commodity dropped quickly and came close to the 1382 support level. None of the extremes was broken last week and the price stayed within the 1439 and 1382 territory. The FOMC meeting will come up on Wednesday and the US inflation data on Thursday. It remains to be seen where the yellow metal will breakout – upside above 1439 or downside below 1382. We will look at the different high probable scenarios and leave the price to make the big decisions.

Last week surge to 1438 has created a resistance zone at 1438-1439. The bulls will push higher toward the 1500 handle if a fast break above the zone happens. To the downside, the big support zone is at 1368-1375. A fast break below this zone could send the Gold further downside to the 1300 handle.

In the last update, we expected a big surge above 1438 to continue the bullish impulse wave from 1160. The chart below was used. 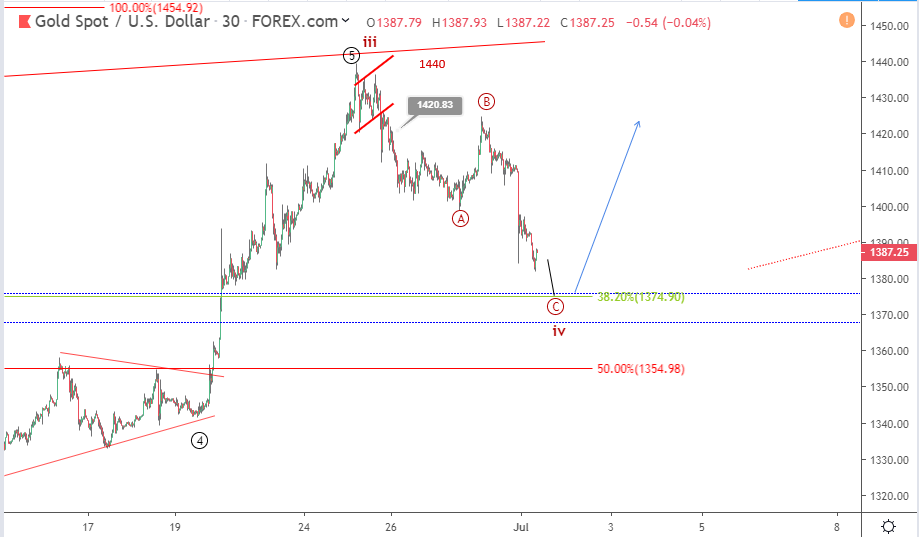 The 1368-1375 support zone was expected to provide adequate support for the bullish trend to continue toward 1500. The wave v rally started just above the support zone but the price couldn’t break above the 1438 resistance level. The current price activities now paint two high probable scenarios. 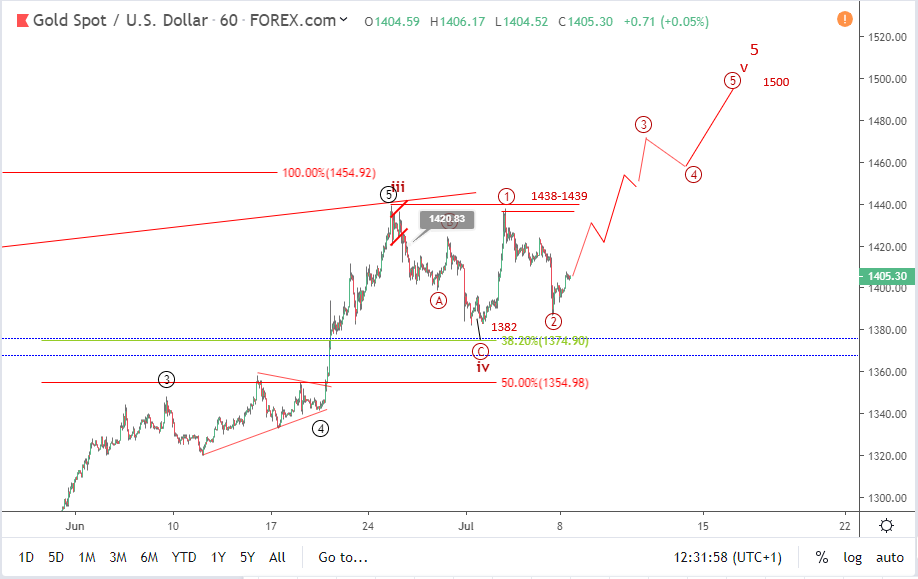 The scenario above assumes the 4th wave has completed at 1382. The first up-swing to 1438 and the dip that followed are the 1st and 2nd sub-waves of wave v. The scenario will be confirmed if the price breaks above the 1438-1439 resistance zone. A dip below 1382 will invalidate this scenario. The second scenario, on the other hand, assumes a slight dip below 1382 would happen to complete the 4th wave. 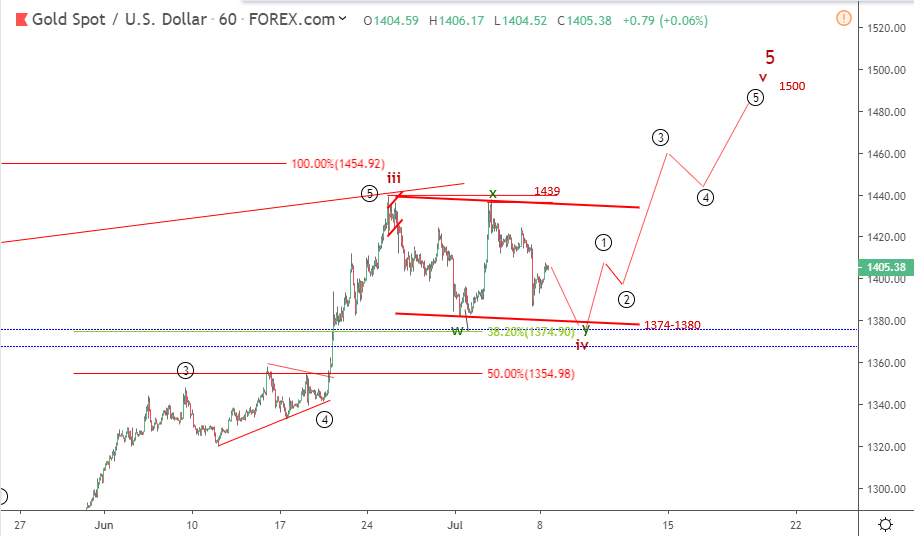 The chart above assumes the 4th wave is not yet complete. The pattern could end up with a complex zigzag pattern at any price between 1374 and 1380. If the price is then supported by the 1368-1375 zone and bounces, the 5th wave rally is expected to emerge toward 1500. Unless a fast dip below the support zone happens, the bullish trend is still intact.

Tags Elliott wave analysis gold price XAUUSD FORECAST
Forex Crypto
Top 5 Forex Brokers
Top 5 Crypto Exchanges
Your subscription could not be saved. Please try again.
Thank you for subscribing. You will be the first to receive all the latest news, updates, and exclusive advice from the AtoZ Markets experts.
Everyone is reading
Top 5 Forex MT5 Indicators for 2021 you should try
Top 20 Cryptocurrencies To Invest In 2021 - The Complete Guide
5 Best Automated Trading Softwares 2021
close ×