Gold has advanced above 1300 after rejecting further knocks below 1280. The following insight is based on the Elliott wave theory.

April 08, 2019. | AtoZ Markets – The Dollar is dropping across the board following losses in the US equities and the Treasury yields. At this expense, the dollar-denominated commodity is benefitting as the more preferred safe haven. The US job sector did not do badly in March after a better than expected non-farm payroll was declared on Friday. However, the gain was suppressed following wage growth retardation and a declining manufacturing sector in the same month. In addition, the optimism that once surrounded the trade talk between the US and China is waning. The yellow metal will benefit from any uncertainties that could cloud the greenback in the coming days and weeks

Last week, Gold bounced off the 1280 support level after the bearish momentum subsided. It remains to be seen whether the metal would extend the gain that has now gone beyond 1300 to hit above 1325 in the coming days before the FOMC meeting on Wednesday. The NFP data on Friday saw another dip to 1285 before price closed above 1290. This week, however, the price has burst upside with a spike to hit the 1300-1302 resistance zone. If the price stays comfortably above this zone, there is a high likelihood of 1325 hit.

Fundamental events to watch out for

There are no strong fundamental events today. The commodity will be influenced by the broader market sentiment which is currently bullish. The FOMC meeting on Wednesday will be the major event this week. Before the FOMC, the US CPI data will be released shortly before the New York session on Wednesday.

Gold technical bias has now turned upside after price defied a bearish impulse wave below 1280. From the larger degree, a 4th wave dip to 1260 was expected. It now looks as if the second leg of the 4th wave is not yet complete. The chart below supports further rallies above 1320. 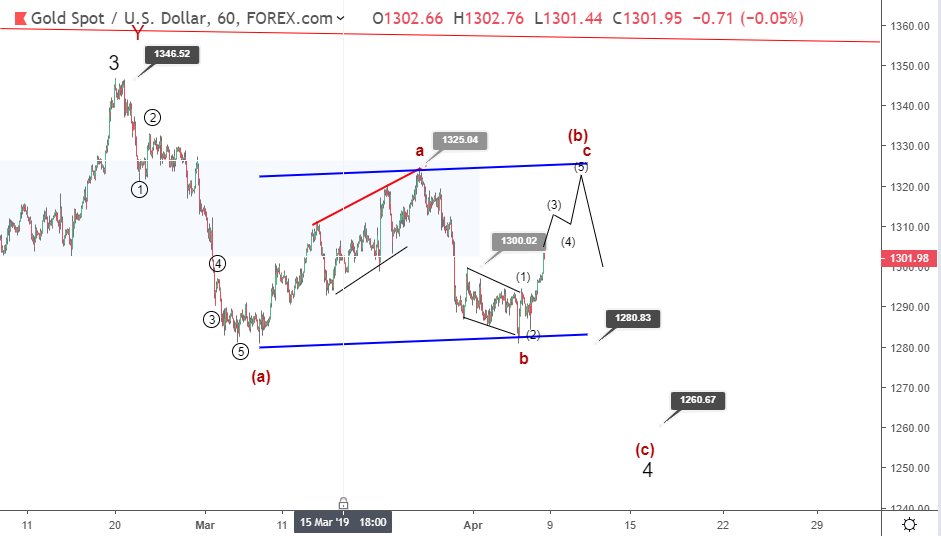 Wave (b) is still ongoing as the chart above shows. The rally could continue toward 1325 before wave (c) resumes. In the last update, we expected a break below 1280 to confirm the continuation of the run from 1325 but the support at 1280 was strong. Price is expected to enter into the 1300-1325 wide zone. If reversal signals are seen around 1325, wave (c) might start and run toward 1260 target.