After hitting 1250 last week, Gold dropped below 1240 and currently trades below it. The following looks at what could happen next based on Elliott wave theory.

The market will focus on the FOMC rate statement coming later in the week. The Fed have said in recent meetings, of their decision to hike rates when the next rate statement is announced in December. However, there are now speculations that the Fed might be under pressure to slow down this pace and probably would leave rate unchanged. Usually, when interest rate is hiked, the currency involved rises as the economy is perceived to be good. The opposite happens after a rate cut. If the rate is unchanged, the market will react into any dovish or hawkish statements. What are the technicals saying?

In the previous updates, we looked at the possibility of a triple zigzag bullish correction from 1160 after price broke above 1243 (to invalidate the double zigzag pattern). From the larger degree, we had two scenarios. If the triple zigzag holds and price responds as expected, then the year-long bearish trend will continue to January-February 2019 with a dip close to 1122. However, the triple zigzag pattern might not have completed yet. Price might extend to 1262-1265 Fibonacci confluence zone before the drop starts. The following chart shows what could happen next. 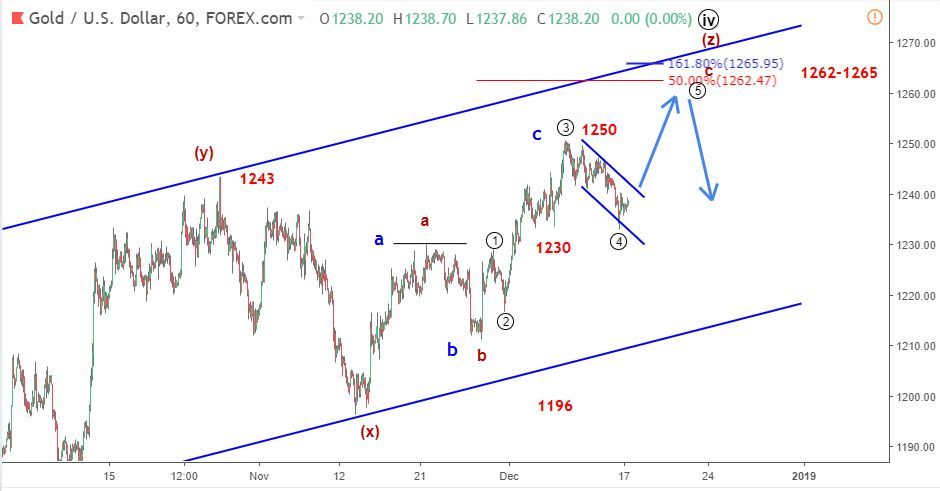 The last leg of the triple zigzag might have ended at 1250. A drop below 1230 is needed to confirm this. A drop below 1196 is expected afterwards. Alternatively, price might make one last leg as it gets attracted to 1262-1265 price zone. A drop from the zone is expected afterwards. Price should stay above 1230 and break above the wave 3-4 (circled) channel to make this happen. The whole picture still looks corrective and acting as a pointer to an impending bearish move. Unless a fast break happens above 1270, the bullish correction from 1160 is in the last stage.

Tags Elliott wave analysis gold
Forex Crypto
Top 5 Forex Brokers
Top 5 Crypto Exchanges
Your subscription could not be saved. Please try again.
Thank you for subscribing. You will be the first to receive all the latest news, updates, and exclusive advice from the AtoZ Markets experts.
Everyone is reading
Top 5 Forex MT5 Indicators for 2021 you should try
Whales Accumulate XRP Despite Conflict Between SEC And Ripple
Top 5 Cryptos to Watch in Quarter 2 2021
close ×