Gold is keeping up with bullish trend with an eye on 1255-1260. The following looks at what might happen next based on Elliott wave theory.

December 06, 2018 | AtoZ Markets -Gold bull run was resisted to go further yesterday after a push below 1240. The market is on a risk-off mood after a 90 days US-China trade war retreat in the last G20 meeting. The Dollar had a modest pick after some fresh demands yesterday. Gold rallied early today back to 1240 in the Asian session but later dropped to 1235 in the London session. Ahead of tomorrow’s Powell’s speech, the market will look for short term clues after today’s U.S ISM non-manufacturing data which is expected to come unchanged.

On Monday, Gold broke above 1228 intraday resistance. A break above this price level was expected to be followed by further rallies to 1250. The long term Gold Elliott wave analysis had two scenarios. The bullish scenario to 1360 was expected to be triggered by a break above 1243 resistance. 1243 is currently holding as a resistance as price still stays below. If the upside move is well limited and price drops back into the 122x zone or below, the long term bearish scenario below 1150 is still highly likely. The bearish scenario was expected to complete an impulse wave C of a flat pattern close to 1122. The 4th wave of this impulse wave C was proposed to end at 1243 with a double zigzag pattern. A break above 1243 would create two sub-scenarios – a rally to 1360 or a triple zigzag 4th wave followed by a fast dip. Ignoring the long term forecast for now, let’s check the short term forecast. 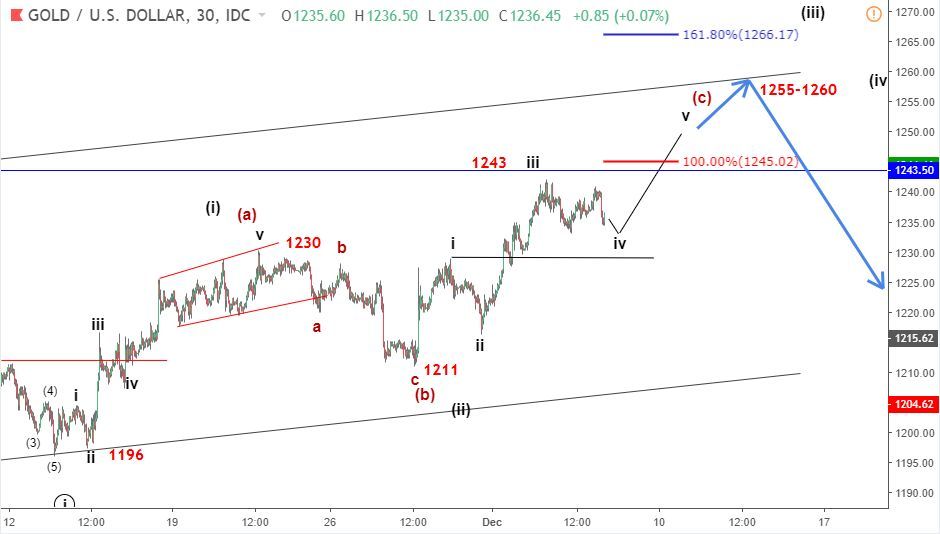 The chart above shows the rally from 1196 counting a zigzag pattern to end at 1245 or 1255-1260. The 4th wave of the year-long bearish impulse wave might morph into a triple zigzag from the double zigzag that ended at 1243. The bearish trend should continue afterwards to 1150 and below. On the contrary, if the current rally hits above 1260 and breaks above the long term channel upper line, we would be counting an impulse wave from 1196 and will expect the long term target at 1360.

Tags Elliott wave analysis gold
Forex Crypto
Top 5 Forex Brokers
Top 5 Crypto Exchanges
Your subscription could not be saved. Please try again.
Thank you for subscribing. You will be the first to receive all the latest news, updates, and exclusive advice from the AtoZ Markets experts.
Everyone is reading
Top 5 Forex MT5 Indicators for 2021 you should try
Top 20 Cryptocurrencies To Invest In 2021 - The Complete Guide
5 Best Automated Trading Softwares 2021
close ×