Forecasts
Sep 20, 2019
Free Trading Account Your capital is at risk.

Gold has continued the bullish correction a bit above 1500 despite the busy fundamental week. The following looks at the technical analysis based on the Elliott wave theory.

September 20, 2019 | AtoZ Markets – It has been a very busy week. The week started with the Saudi Oil facilities attack giving the Oil price an early lead. The yellow metal also started this week with an upsurge to 1511 after the last retest of the 1480-1485 support zone. Prior to the Wednesday FOMC meeting, the precious commodity moved sideways below 1511 and above 1490. After the Fed cut the interest rate as expected, Gold slumped to retest the support zone but bounced off it once again. On Thursday, the minor rally continued and hit 1500. Currently, the non-yielding metal trades slightly above 1503. Gold price is certainly emerging into a complex corrective pattern which has now lasted for nearly two trading weeks.

The Fed was expected to provide the needed volatility to cause a breakout. However, after the rate cut on Wednesday, they followed with some hawkish comments and then restrain from giving enough clues to their future policies projections. The greenback which was in an early gain against the majors is now returning downside. There are no high-impact fundamental economic events today.

On the geopolitical front, the US trade conflict with China may not be the only one to worry about. US President Trump has asked for additional sanctions on Iran after the Saudi Oil attack and the EU after the latter’s decision in the last ECB meeting. The yellow metal often profits from these geopolitical tensions as investors’ most preferred safe-haven commodity. It’s almost impossible to be certain how all these events will pan out.

Since September 10, Gold has been in a minor bullish correction after the drop from 1557 to 1484. In the last update, we expected a surge to 1523 or above to complete this pattern as the chart below shows. 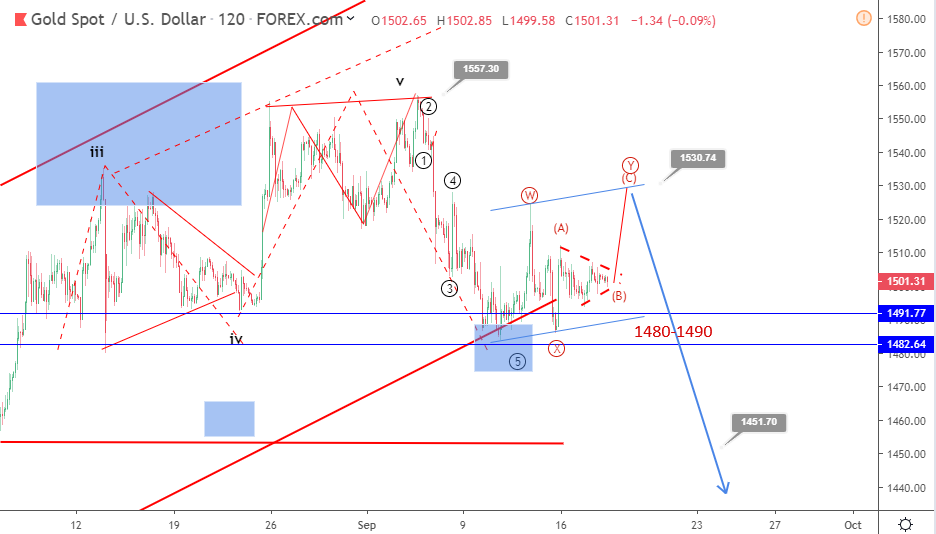 After the FOMC, the price still remains within this range and now emerging into a more complex correction. The new chart below shows two possible patterns we could watch out for. 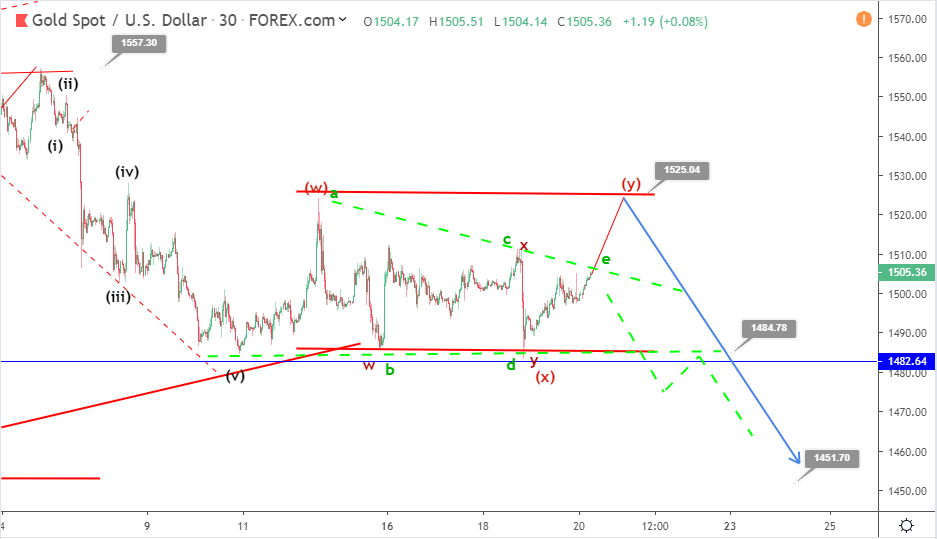 The degree of the labelling has been increased for better clarity. A triangle pattern could have completed already around 1505 as the green lines and wave labellings show. However, this will be validated if the price breaks below the 1484 neckline. The next bearish target is 1451 and potentially 1400. On the other hand, if the price breaks above wave a-c-e resistance boundary line of the triangle, we should expect a double zigzag pattern around 1525. If there is a bearish signal, short-term sellers could drag to 1484, 1451 and 1400 target levels. Until a massive break above 1557 happens, the bearish correction is not yet over.

Tags Elliott wave analysis Gold analysis
Disclaimer: The views and opinions expressed in this article are solely those of the author and do not reflect the official policy or position of AtoZ Markets.com, nor should they be attributed to AtoZMarkets.