Gold still holds between 1233 October high and 1218 last week low. The current price pattern shows an emerging bullish triangle pattern. Will there be a breakout upside?

October 2018 | AtoZMarkets– Last week, Gold holds below 1233 and stays above 1218 after the huge bullish breakout away from a 2-month old range. The range was well resisted at 1208-1214 before the bullish breakout happened. It would be expected that if price retraced, it would most likely retest 1204-1218 before making more moves upside. However, last week, price had a bearish head and shoulder pattern which was expected to complete the 4th wave of the year-long bearish impulse wave. Should there be a significant breakout below the head and shoulder neckline, price was expected to drop to 1200. There wasn’t a significant bearish breakout but price stayed above 1218 and didn’t break above 1233. This scenario has created a big chance for the bull run to continue as the 4th wave continues. However, we can’t write-off the bears as the head and shoulder pattern is still valid. There are two scenarios, which both point upside, and an alternative bearish scenario. 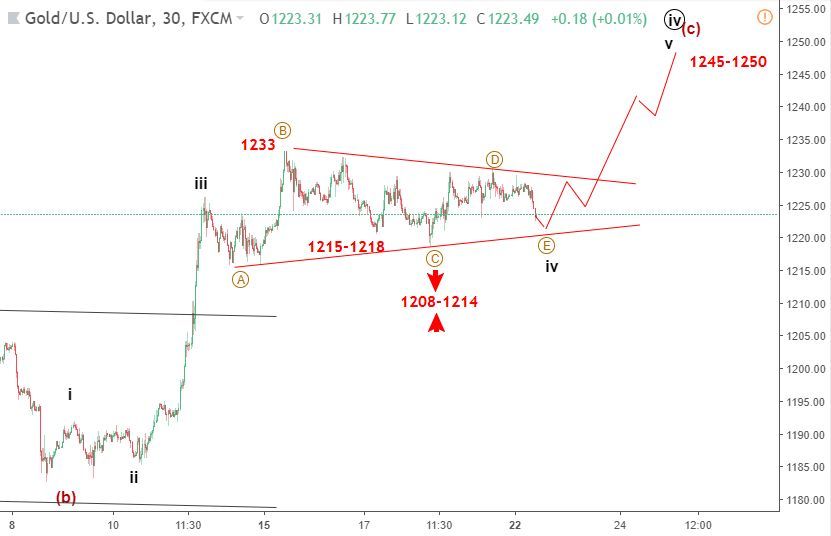 The chart above shows a triangle pattern just above the 1208-1214 strong support zone. Triangle patterns are known to often precede the end of a trend or correction. Probably price would make one more move upside to complete the 4th wave of the year-long bearish impulse wave. A break upside above wave D (1231) would be the minimum requirement to consider a successful breakout. Upside target is around 1245-1250. A bearish break below 1218 into the 1208-1214 zone would trigger last week bearish forecast. The head and shoulder pattern is not violated yet as the second scenario below shows. 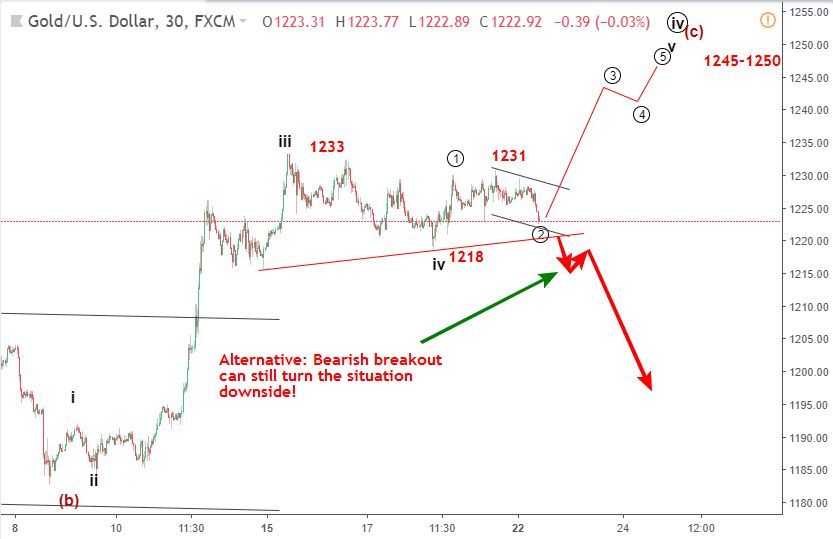 The chart above shows an alternative bullish wave count and a bearish scenario. The 4th wave triangle in the previous chart is unusually much bigger than the corresponding 2nd wave. The wave count above also requires a break above 1231 which is the top of wave 1 of 5 of (C) of the year-long wave 4 correction. Though they have similar forecast, I will prefer this wave count to the previous one. On the downside, the bullish scenario would be violated if price breaks below 1218 into the 1204-1218 zone. If this happens, wave 4 might have completed with a reversal head and shoulder pattern and might thereafter head to 1200.

Which of the bullish wave counts would you go for? Do you think the bearish scenario is more likely? Please share your thoughts in the comment box below.

AUDUSD Plunge Below 0.7720 Event Area – Bears To Continue Further Downside?
Forex Crypto
Top 5 Forex Brokers
Top 5 Crypto Exchanges
Your subscription could not be saved. Please try again.
Thank you for subscribing. You will be the first to receive all the latest news, updates, and exclusive advice from the AtoZ Markets experts.
Everyone is reading
Ripple Lawyers Object SEC’s Request to Extend Discovery Deadline
SEC Lawsuit Against Ripple May Drag On Until 2022
Ethereum Sustains Below $2,500 Psychological Area - Bears to Push the Price Downside?
close ×