Gold slid to 1270 after Wednesday’s FOMC details. The following insight is based on the Elliott wave theory.

May 02, 2019 | AtoZ Markets – All attention was on the FOMC meeting which concluded on Wednesday. Prior to the meeting, the USD was weak across the board. Meanwhile, the Fed made no changes to its policies and reiterated its desires to keep rates unchanged. The Fed chairman, Powell also refused to predict a rate cut if the inflation weakens further. The market caught a rhythm afterwards and the USD strengthened across the board. EURUSD and GBPUSD dropped over 70 Pips while Gold has now dropped over 150 pips.

The yellow metal was, prior to the event, confined within 1288 and 1278 boundaries. The current Fed-induced dip has now taken prices below 1278 to 1270 and might drop below April’s 1266 low. Once there is a higher demand for the Dollar, the precious commodity usually loses its safe-haven appeal. Friday’s employment data and the ISM Non-manufacturing PMI data are the next high impact events on the economic calendar.

Gold has continued the bearish run after breaking below 1278 lower boundary of the congestion zone formed before the FOMC. From a technical perspective, XAUUSD price should drop to the 1260 bearish target level to complete a reversal pattern. it remains to be seen whether the demand for the non-yielding commodity will resume.

From the perspective of Elliott wave theory, price is completing the 4th wave dip of the medium term bullish impulse wave that started in 2018 from 1160. The 4th wave started from 1346 and is looking likely to complete a zigzag pattern with a diagonal C. Prior to the FOMC, we identified the ending diagonal C possibilities in the last update with the chart below. 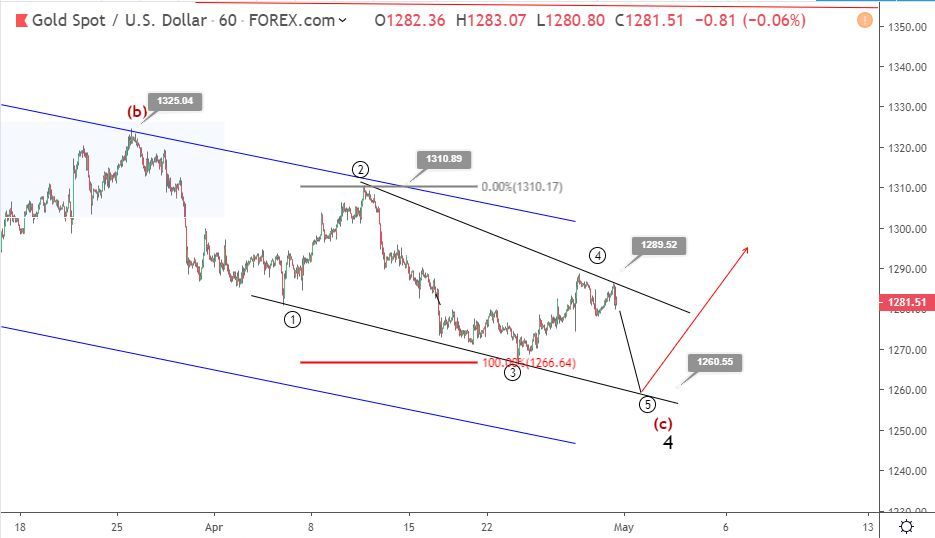 The current dip fuelled by the FOMC plays into this forecast very well. A 5th wave dip to 1270 has followed while the 4th wave rally to 1288 did not violate the diagonal structural rules. 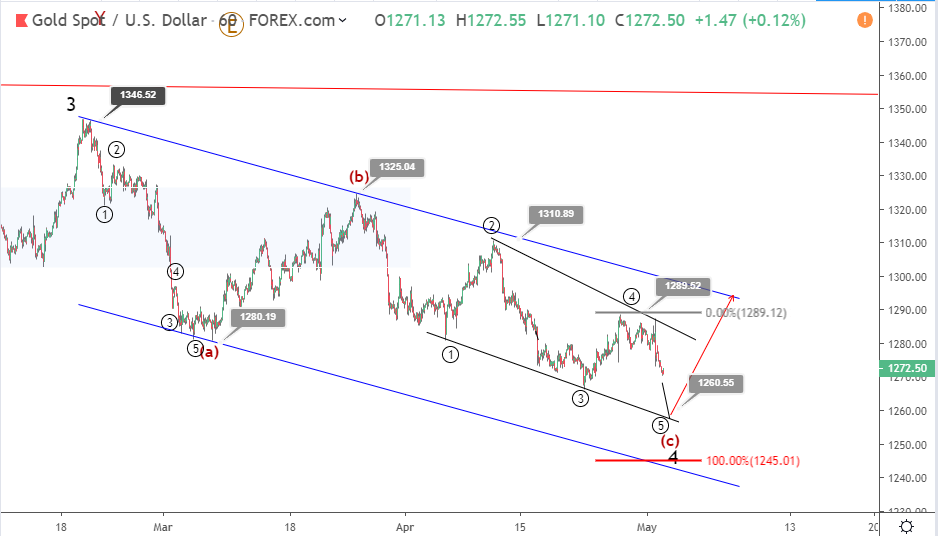 Meanwhile, the diagonal will be violated at 1245. This means that if the dip continues to 1260 or even 1250, the pattern still holds. However, there is another reversal support base (zigzag channel support line) just below 1245. One can not say exactly where the reversal will be but buyers can look for bullish clues at 1250-1260.

Ethereum Facing Resistance Around $2,400 Price Area - What Next?
Forex Crypto
Top 5 Forex Brokers
Top 5 Crypto Exchanges
Your subscription could not be saved. Please try again.
Thank you for subscribing. You will be the first to receive all the latest news, updates, and exclusive advice from the AtoZ Markets experts.
Everyone is reading
Ripple Co-founder Jed McCaleb Stops XRP Sales
XRP Surges Amid Controversial Coinbase Return Evidence
Ripple Agrees to Provide SEC with Company Records
close ×