Get VIP Trading Signals Market Watch
Trade Now Your capital is at risk.
The Gold price chart is close to completing a bearish reversal pattern. Will the metal resume the long term bearish correction? The following Gold Elliott wave analysis shares some insights.

December 18, 2019 | AtoZ Markets -  The Gold price is trading steadily below 1480 this week. After touching 1486 last week, the yellow metal lacks the momentum to push higher. The metal is now up by nearly 1% in December after the November bearish breakout pushed it 1445. The US-China trade conflict increased the demand for Gold this year. The metal surged from 1280 to 1557 (21% gain) between January and August. Since August, however, a significant part of this has been lost. Currently, the metal is up by 15% since January and is expected to close the year on a positive note. However, the current bearish correction from 1557 should deepen further due to the trade deal optimism. Risk appetite is increasing. Stock markets  are rising. Safe-haven assets like the Gold are therefore expected to plummet due to higher investors' appetite and thus higher money flow into more risky assets.

The US and China have agreed on a phase one deal. Although there are reports that China may be a bit unsettled. Meanwhile, China has pledged to buy at least $80 billion worth of US produce (mostly agricultural) in the next two years as part of the deal. However, new reports have added that China will go for US farm produce based on how competitive they are and won't buy anything just on the basis of the agreement. More positive highlights will most likely drag the Gold price downside toward the 1400 handle. There are no high-impact economic data from the US this week. Therefore, the broader market sentiment will be the major driver throughout the week.

Technically, there is a big chance that the non-yielding metal will resume the long-term bearish correction from 1557. The current surge from 1445 is corrective. Unless a massive breakout above 1500 happens, the Gold price has more chance of diving toward the 1400 handle. In the last update, we used the chart below (Charting tools from TradingView). 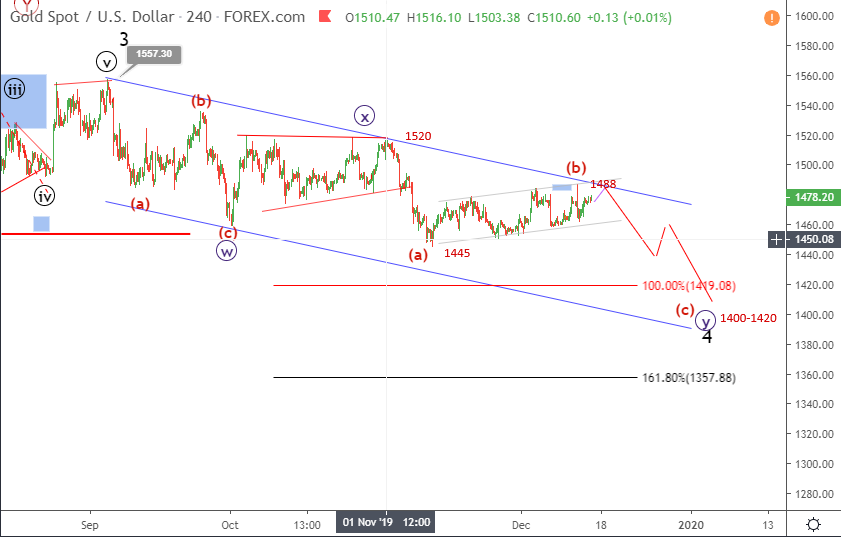 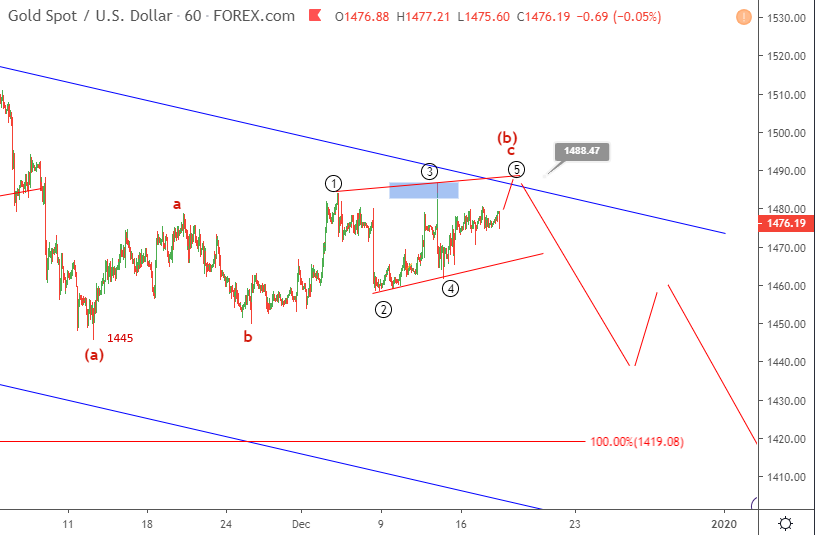 Wave (b) is completing a zigzag pattern. Wave c of (b) is emerging into an ending diagonal. The current surge might extend to 1488-1490. If the Gold price falls fast afterwards, we should see the metal slump toward 1400.