Gold dropped below 1325 to hit its lowest price in a week. Will price drop back to the 1300 handle? The following share insights based on Elliott wave analysis.

June 11, 2019 | AtoZ Markets – The yellow metal extended its Asian session losses recorded on Tuesday. Early in the London session, the price dropped to 1322 from 1330. After failing to hit 1350, the precious commodity retreated from the big upsurge that started in late May till early June. The rally was a result of the plummeting Dollar. It now seems the dollar is gaining some positive tractions despite the fiery words from president Trump revealing his plan to increase tariffs on more Chinese exports.

Gold price is now pointing downside this week. The downside run could be a bit cautioned ahead of the US inflation data coming on Wednesday and Friday and the Fed meeting next week. The market expects the Fed to state a rate cut at the end of the year – a move which often benefits the metal. However, if the market expectation is missed, one would expect the near-term direction of the non-yielding commodity to be bearish toward the 1300 handle and even below it. There is a mixed expectation from the technical perspective as the charts below show.

The daily chart below shows the price in a sideways range since 2017. The sideways pattern is emerging into a triangle pattern. There is also a strong resistance zone at 1370-1375. 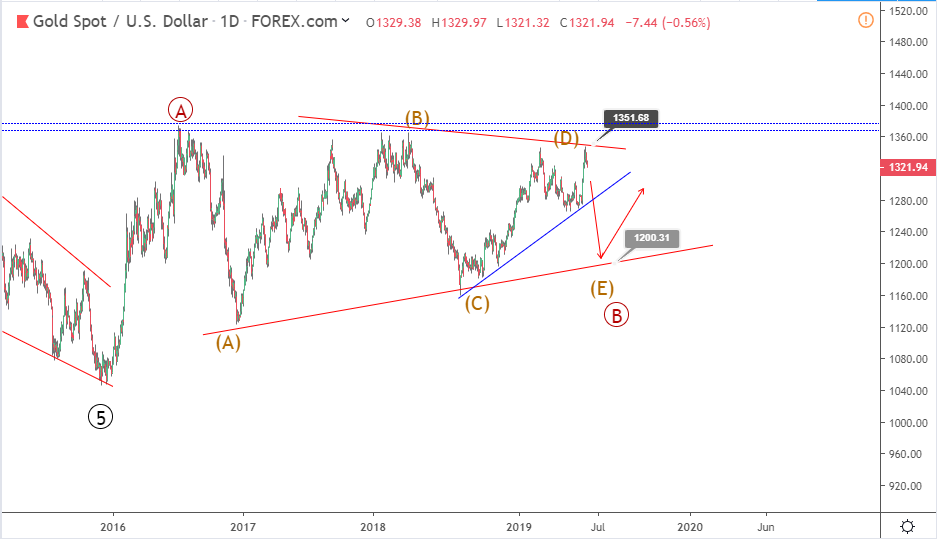 The triangle pattern is not yet complete and it seems the last leg could continue toward 1200. That would result in a big sell-off in the coming days and weeks. If price breaks above this resistance zone instead, Gold should continue higher toward 1500 in the long-term. The scenario above will be confirmed if the price dips to 1270 as the H4 chart below shows. 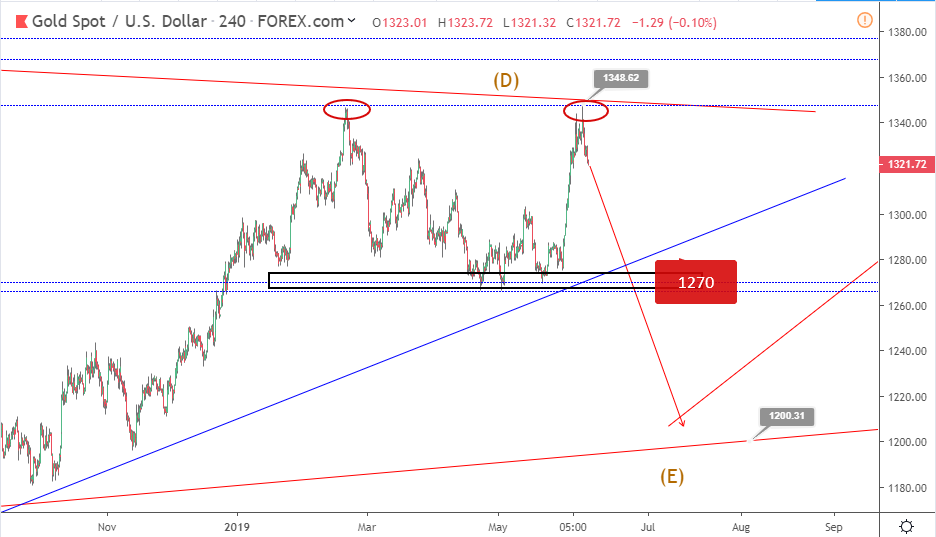 If this move happens, a double top reversal pattern will have completed at 1348 with the neckline at 1270 and its neighborhood. A break below 1270 would lead to further sell-off toward 1200 to complete wave E of the long term triangle pattern. The long term bullish trend could continue afterwards.

Gold Climbed Over $1,825 Price Area - Will Continue Further Higher?
Forex Crypto
Top 5 Forex Brokers
Top 5 Crypto Exchanges
Your subscription could not be saved. Please try again.
Thank you for subscribing. You will be the first to receive all the latest news, updates, and exclusive advice from the AtoZ Markets experts.
Everyone is reading
The Legal Battle Between the SEC and Ripple Continues
Binance Cancels Cryptocurrency Trading in Australia
Judge Denies Ripple's Request for SEC Employees’ Crypto Transactions Disclosures
close ×