Gold has dropped further on Friday after a better than expected US GDP data. The following looks at what could happen next based on the Elliott wave theory.

March 01, 2019 | AtoZ Markets – The US dollar has extended its gain on Friday after Thursday's upbeat US GDP data. The data showed that the US economy improved by 2.6% annualized in the last quarter of 2018. The rallying Dollar led to an upsurge in the US treasury yield bond. This has therefore spurred the non-yielding commodity to hit over two weeks low after it continued 2018's bullish run to $1,346 an ounce. Gold is set to end this week bearish to complete three consecutive weeks of aggressive selling into 1318-1300 zone. Traders will focus on the ISM manufacturing PMI and the Uom consumer sentiment index data coming from the U.S later today.

Price is getting close to the 1302-1300 technical support zone after losing 3% from 1346 in less than three weeks. However, the current dip is most likely the 4th wave correction of the impulse wave rally from 1160. Price is currently bouncing off from 1306 but will most likely go down further to test this support zone. However, the bearish run will be expected to continue if the price breaks below 1300 very fast. If 1300-1302 holds again, price could surge to 1360-70 bullish target in the next rounds of rallies.

Prior to the current dip, price completed a triangle pattern to probably mark the end of the second wave of the correction. Corrections are made of 3-waves according to Elliott wave theory. Price did break below the triangle to continue the 3rd wave into 1318-1300 territory with strong technical support at 1300-1302. The chart below was used in the last update. 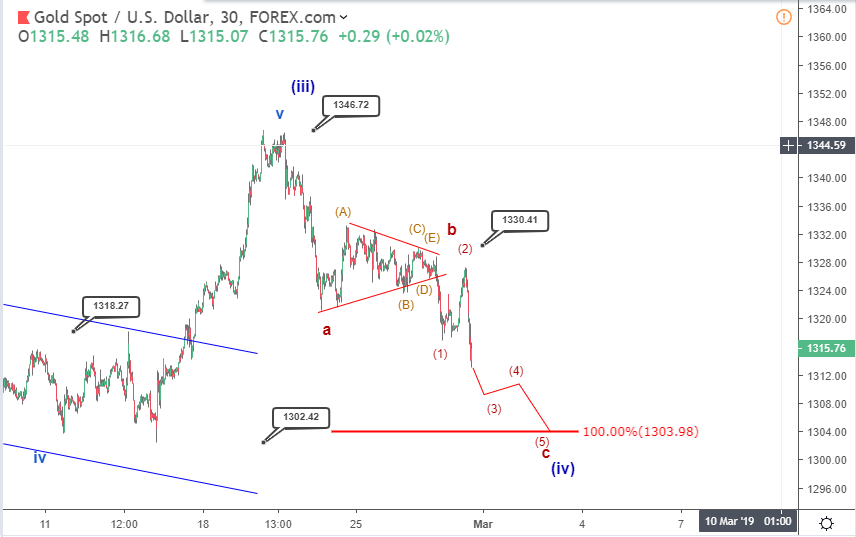 After the triangle breakout to 1327 on Wednesday, Gold quickly rallied back to the Triangle region as a result of new demands following the US-North Korea deal breakdown. The upsurge ended and price quickly turned downside. The demand for Gold was overpowered by more USD demand following better US GDP data. Price is expected to hit 1302-1300 support zone. There, we will see what next for Gold. The following looks at a bullish possibility. 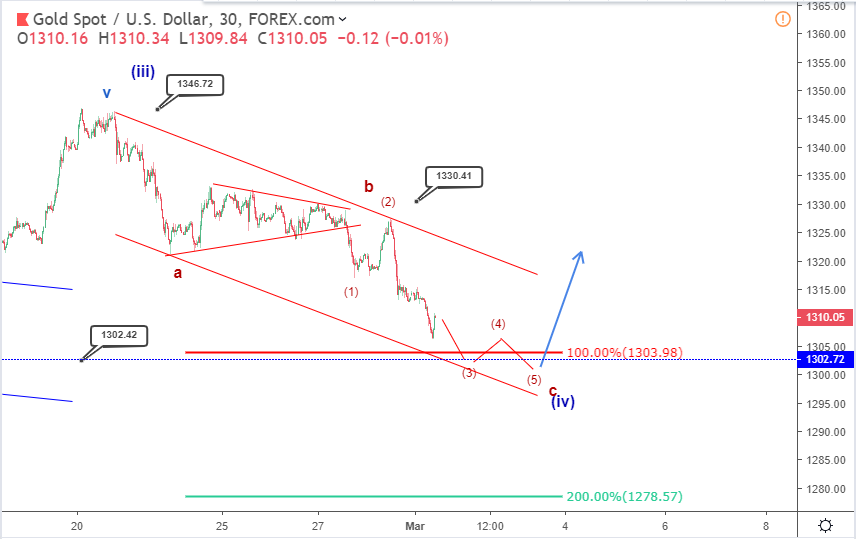 Will the 4th wave correction end at this zone? The corrective dip is adequately engulfed within a falling channel. More demand for Gold as a safe haven might be seen in the coming weeks as the political and economic wars and uncertainties continue.