The Gold price has returned downside this week after it crashes below 1295 on Thursday. The following give insights based on Elliott wave theory.

After breaking minor support levels at 1312 and 1307, the yellow metal has yielded to the downside pressure to continue the large bearish correction that started late February. The commodity now has fewer barriers on its way to 1280 and 1260 bearish targets.

Gold has resumed the safe-haven mood since the US President declared huge tariffs on Chinese products. Since the two big economies decided to extend the 100-days truce agreed in 2018, the demand for the yellow metal has increased again this month as it was supported at 1280 and had an over 400 pips rally above 1323. Despite the rally, Gold price remains under the short-term bearish pressure that could push it down to 1260 in the coming days/weeks.

From the perspective of Elliott wave theory, the dip from 1346-7 is completing the 4th wave of a bullish impulse wave from 1160. 4th waves are corrective in nature i.e they are made of three waves. The first leg (wave) ended at 1280 from 1346 before the corrective wave b rally above 1320. In the last update as the chart below shows, we identified the rally from 1280 to have completed a double zigzag corrective pattern. 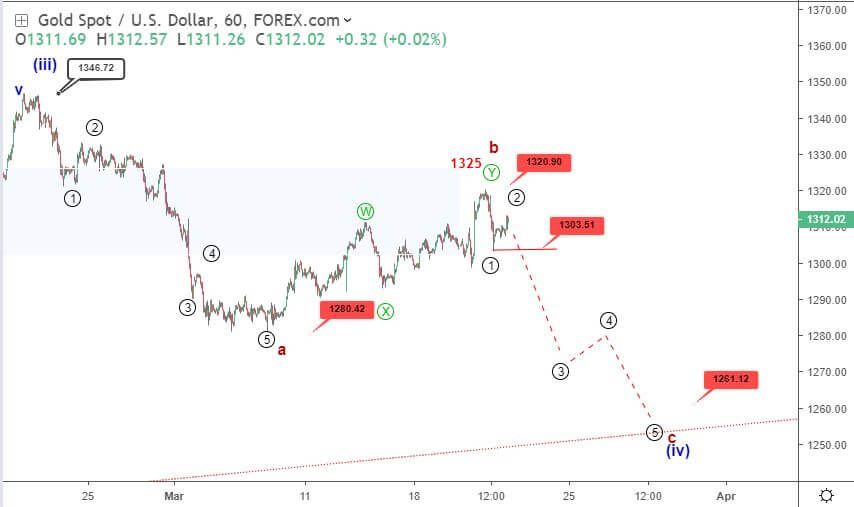 A break below 1303 was expected to trigger a free fall toward 1260. Price didn’t break below to trigger this forecast but made one more leg above 1320 to 1325 but still within our market resistance and reversal zone. Price has now dropped over 300 pips to surrender to the bearish forces. Here is the new update. 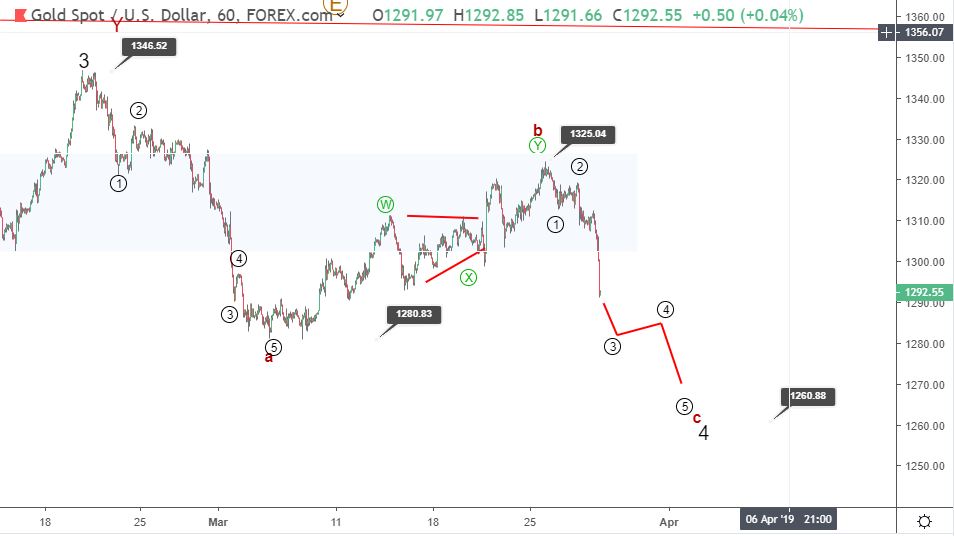 Gold has dropped below 1302-1300 intraday support zone and now heading to test 1280. Wave b is confirmed to complete. An impulse wave c to 1260 is now very much likely. If the larger degree 4th wave is completed as expected, the long term bullish trend should resume. The current bearish target is at 1260. In the next bullish phase, the next target is 1360-1370. Let’s see how far the current dip will go.

Tags Elliott wave analysis gold price forecast XAUUSD
Forex Crypto
Top 5 Forex Brokers
Top 5 Crypto Exchanges
Your subscription could not be saved. Please try again.
Thank you for subscribing. You will be the first to receive all the latest news, updates, and exclusive advice from the AtoZ Markets experts.
Everyone is reading
Top 5 Forex MT5 Indicators for 2021 you should try
Top 5 Cryptos to Watch in Quarter 2 2021
Bitcoin Facing Resistance Around $60,000 Event Area - What Next?
close ×