Gold has recovered from the fast dip to 1525. The following technical analysis is based on the Elliott wave theory.

August 28, 2019 | AtoZ Markets – The yellow metal is gradually recovering to continue the bullish trend to higher prices. The US-China trade war has lasted more than 400 days. The current Gold bullish trend started in August 2018 – now a year old. It’s very clear the non-yielding metal has so much enjoyed the trade war more than most assets. It has hit its highest prices in the last 6 years and not looking relenting.

In the last trade war update, the decision by China to impose more tariffs on US products went against market expectation which had expected a return back to the table as tweeted by President Trump last week. The POTUS has responded as usual on Twitter, suggesting a resolution is not near. The US Treasury yield continues to plummet as the demand for Gold, a safe-haven asset, continues to rise. Earlier this week, the price of the precious commodity dropped to 1525 an ounce, after a quick surge to a new high at 1555 an ounce.

Meanwhile, from the technical perspective, the metal is around a reversal zone. However, there has not been any clear price reversal patterns spotted. A new surge above 1550 is very much likely as the buyers push toward the 1600 handle since February/March 2013. To the downside, anything can still happen. A massive dip below 1525 will lead to further dip to the 1500 handle on the short-term. Below 1500, there are support levels at 1480 and 1451 which might be tested before the 1400 handle.

From the Elliott wave perspective, Gold is close to completing a long term Elliott wave pattern from 1160. The expected dip was expected to be corrective and limited above 1400. In the last update, we used the chart below. 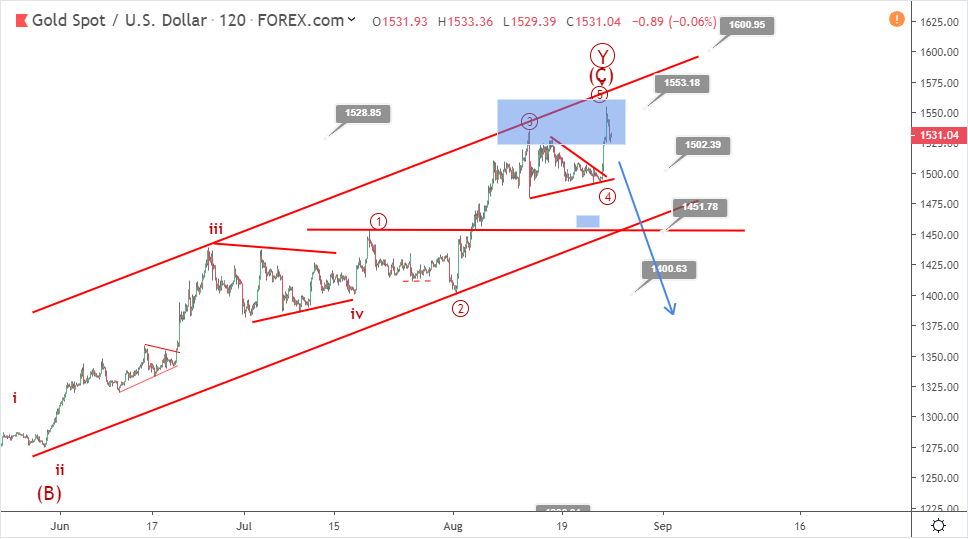 The 4th wave of wave v of C ended with a triangle around 1500. Price has now rallied to the reversal zone. We expected a bearish correction pattern which has not yet emerged. The price is now recovering back to 1545 and probably eventually to 1550 as the new chart below shows. 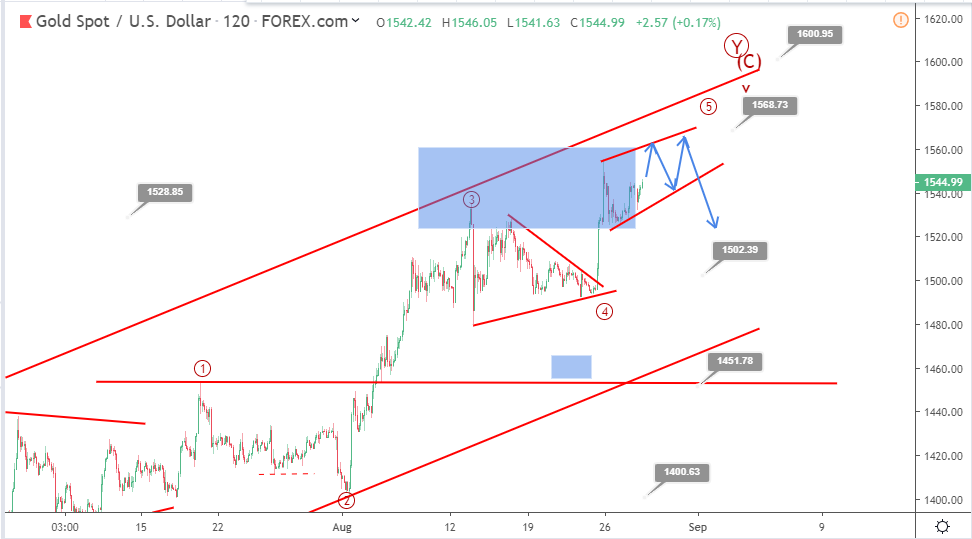 A bearish reversal pattern is expected. One of the most preferred patterns for this purpose is the ending diagonal pattern. If it happens, a bearish correction might happen toward 1450 or 1400. Otherwise, Gold is expected to break new highs on its way up.