Gold spiked upside toward 1300 after the report of China’s tariff retaliation on the US. What could happen next?

May 13, 2019 | AtoZ Markets – China has announced a series of retaliatory measures to counter the recent US tariff hikes on Chinese products. As a result of this, the USD tanked and the dollar-denominated commodity gained significantly toward 1300.

The US-China trade talks last week didn’t come with the right outcomes. President Trump accused China of breaking down previous agreements between the two hence tariff hikes were sanctioned on Chinese exports into the US. As expected, China came with its own version to counter the moves by the US. According to reports, China will now increase tariffs from 5% to 25% on a total of $60 billion worth of goods from the US. The markets are already catching the cold. The worldwide equities dropped sharply and the Dollar tanked across the major currency pairs. Gold and ‘commodity currencies’ have gained significantly. The yellow metal gained over 175 pips in just two hours to hit very closely to 1300.

Prior to the spike, Gold was trading below 1291 intraday resistance. It dropped to 1282 and was under a light bearish pressure with a break toward 1250 expected. However, the biggest risk concern for this commodity this week remains the US-China trade war. The precious metal will most likely respond to trade war headlines as the week progresses. The near-term sentiment now points to the upside.

In the last update, after price resisted a break toward 1300, the bearish scenario was set to happen. As the chart below shows, we expected a break below 1279 to confirm the bearish forecast with the target at 1250. 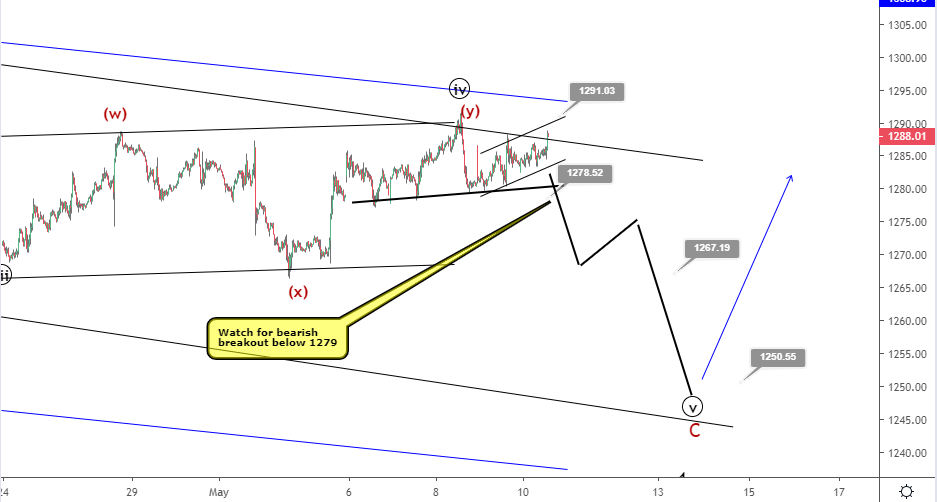 The spikes from the trade talk face-off have invalidated this setup and now requires that we take a different outlook. The alternative bullish scenario above now seems appropriate. An ending diagonal pattern with the 5th wave truncated and completing a double bottom reversal pattern at 1266. Truncated 5th is often seen in impulse wave but they are also possible on ending diagonal patterns. With the break above the double bottom neckline at 1290, Gold is expected toward 1310 resistance level at least. It remains to be seen whether the 4th wave of the bullish impulse wave from 1160 has ended at 1266. Like earlier said, more spikes can be seen in either direction as more headlines relating to the trade deal come up.