Gold is about to complete a triangle pattern which might cause a bullish breakout. The following technical analysis is based on the Elliott wave theory.

July 18, 2019 | AtoZ Markets – The yellow commodity is currently dropping below 1420 after Wednesday’s 250 pips rally which led to a hit of 1423. After hitting a multi-year high of 1439 in late June, the metal has gone sideways  – gyrating with extremes at 1385 and 1437. The trend is extremely bullish. A break above the upper boundary of the triangle pattern will most likely lead to further rallies to 1500. Price is currently below the upper zone of the sideway pattern. There could be a retest of the lower boundary just below 1400 before the big bullish breakout.

The most important price levels are the extremes of the sideway triangle pattern. If price breaks below the lower boundary, a retest of the 1275-1268 support zone should happen. If the price dips further, a much larger bearish correction toward 1300 should happen. To the upside, a break above the upper boundary could lead to 1500 handle

Gold price pattern is exhibiting a clear bullish impulse wave that started from 1160 in August 2018. The current sideways move is the 4th sub-wave of the 5th wave. Wave 5 started on the first day of May and will most probably extend beyond the 1254 critical Fibonacci resistance level. In the last update, we identified the 4th sub-wave of wave 5 as an emerging triangle pattern with the chart below. 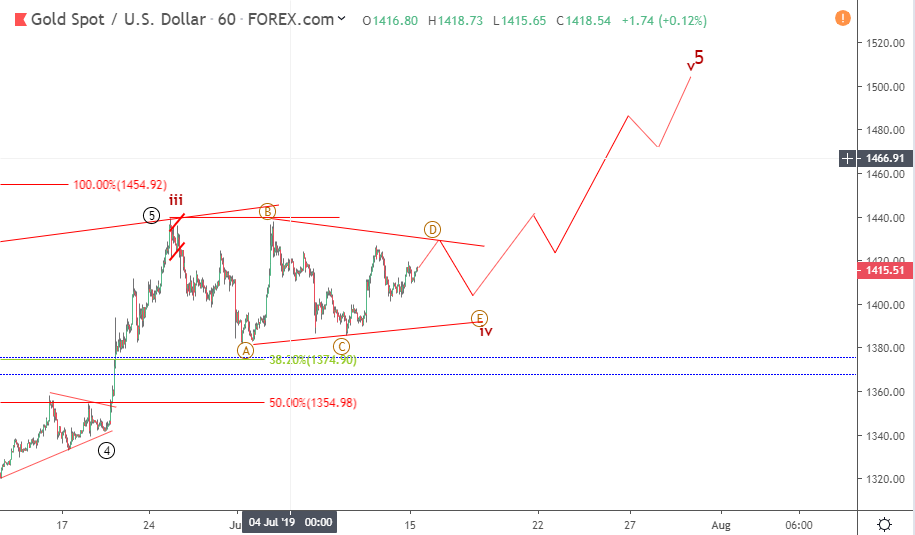 The 4th and 5th leg – wave D and E, of the triangle, were not yet identified at the time this was updated. It seems yesterday’s surge above 1420 has completed wave D and wave E could continue to 1400 or below as the chart below illustrates. 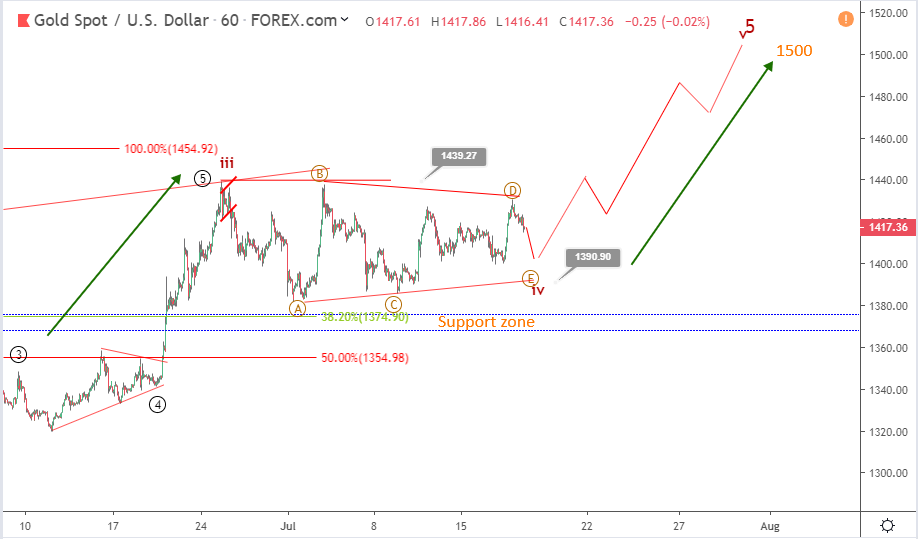 A dip to 1400-1390 is very much likely. However, it’s not certain how deep the wave E of a bullish triangle would go. In this case, it could go as deep as 1390 or as shallow as 1415 before the bullish trend resumes with a big breakout away from the triangle territory. In any case, a break above wave B high would confirm that waves D and E have ended. The bullish target is 1500. This forecast will be invalid if the current minor dip continues below 1380.

Tags Elliott wave analysis Gold analysis
Forex Crypto
Top 5 Forex Brokers
Top 5 Crypto Exchanges
Your subscription could not be saved. Please try again.
Thank you for subscribing. You will be the first to receive all the latest news, updates, and exclusive advice from the AtoZ Markets experts.
Everyone is reading
Top 5 Forex MT5 Indicators for 2021 you should try
Top 5 Cryptos to Watch in Quarter 2 2021
Bitcoin Facing Resistance Around $60,000 Event Area - What Next?
close ×