October 14, 2019 | AtoZ Markets - The US-China trade negotiation was the major event last week after the market reacted mildly to the last FOMC reports. The two nations agreed on an initial deal and the prices of risk-off assets like Gold, CHF and JPY slumped while the Stock market and the other risk-on assets like the CAD, NZD and AUD gained swiftly. Gold, a safe-haven asset, quickly fell to 1474. Prior to the meeting, the commodity was moving closer to the 1520 resistance level. The bulls finally lost it as the meeting came out positive.

However, buying pressure quickly re-surfaced and the metal recovered quickly above 1490 between late Friday and early on Monday's London session. The technical (October 14 Gold Elliott wave analysis) picture still supports the continuation of the bullish trend but that is not cast on a stone.

The US-China trade war has been the major driver of the Gold price. The two countries met on Thursday and Friday to discuss possible ways to end the war. There was a sort of agreement between the negotiators on Thursday before President Trump held a meeting with China's deputy premier. The first phase of the deal was to make the US cancel its October 15 tariffs on Chinese products. China then agreed to purchase between $40 billion to $50 billion worth of US agricultural products. An agreement is in place. However, the war is not completely over. We will have to wait and see what happens later on.

Aside from the trade deal, the banks in the US and Canada are not opened today. The US will reveal its core retail sales data on Wednesday. At the moment, Gold trades at $1,496 per barrel.

The long-term trend remains bullish although the price still remains in the territory of the bearish correction from 1557 to 1463. In the last update, prior to the Thursday meeting, we used the chart below to represent the most likely scenarios. 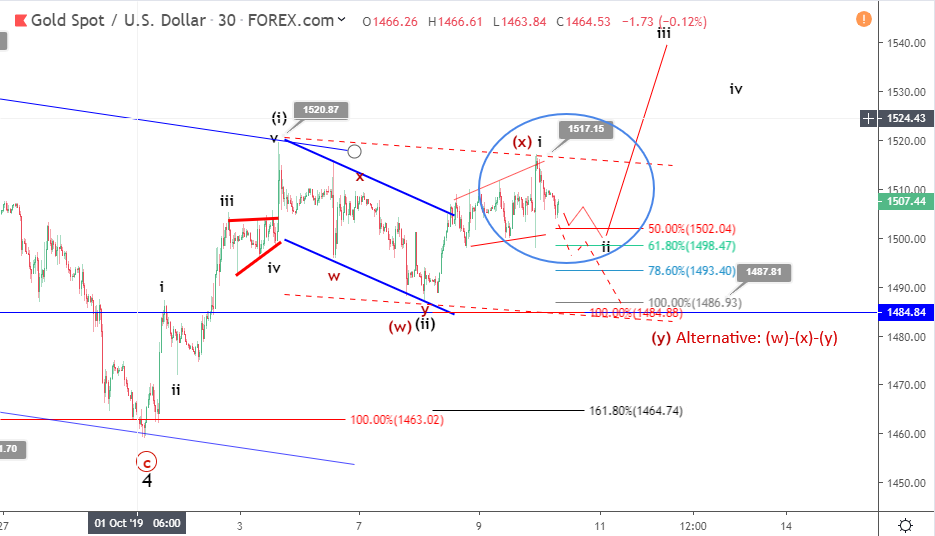 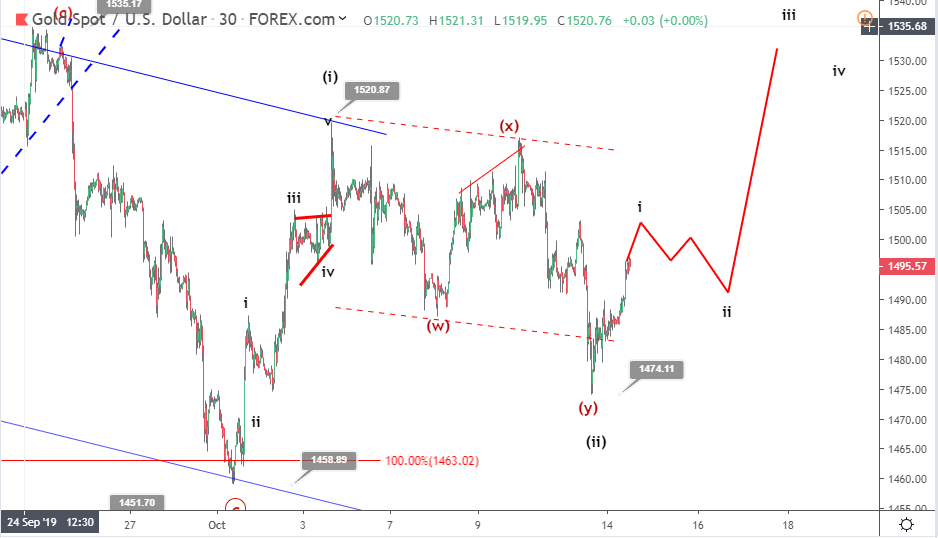 If the price drops back below 1474, then the bullish forecast shown in the chart above will fail. Gold looks more poised to continue the bullish trend. Once price breaks above the wave (w)-(x)-(y) channel, we will expect it to hit higher prices at 1535 and 1557.