Gold dropped below 1285 to continue the bearish correction from 1346. The following insight is based on the Elliott wave theory.

April 04, 2019. AtoZ Markets – Gold has resumed bearish on Thursday after breaking below 1288 intraday support formed on Wednesday. Price is heading downside to retest 1280 major medium-term support level. If this level holds, there might be a rebound above 1290. A break below 1280 would be followed by renewed bearish sentiments toward 1260 technical reversal zone.

The news report this week suggesting that the US and China are closer to an agreement on a trade deal has led to fresh demands for the Dollar. The yellow metal had some decent moves upside on Wednesday after downbeat US ADP non-farm employment and ISM nom-manufacturing PMI data. However, the rally was limited at 1293 before the bearish run resumed. The trade deal will have a short term impact on the dollar-denominated commodity. However, the technicals support further moves downside.

Probably the most important short-term price level is the 1280 support. A bridge below this level will most likely be followed by a further dip to 1260. Below 1260, there is 1245 support formed on October 2018. If price bounces off 1280 support, we might see a retracement to retest 1300-1302 intraday resistance zone.

From the long-term perspective, Gold is still in the bullish trend after emerging into an impulse wave from 1160. The current dip, however, is the 4th wave correction. Corrections are made of three sub-waves except for triangles which have five sub-waves. Wave a of the 4th wave started at 1346 in late February and ended at 1280 in early March following a swift fall. Wave b completed a double zigzag pattern from 1280 to 1325 in late March and price started wave c with another swift fall close to 1280. Wave c is expected to go deeper and complete an impulse wave but must break below the 1280 barrier. In the last update, we used the chart below to follow up the dip from 1325. 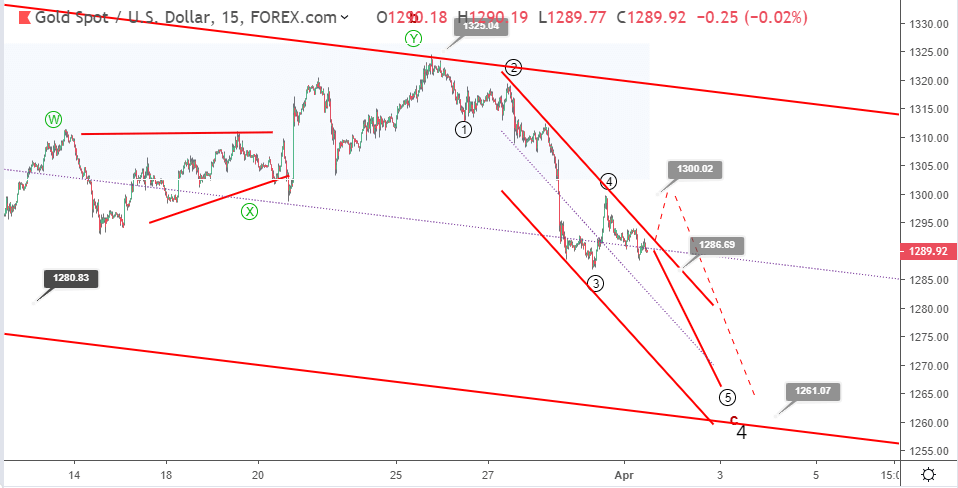 A dip to 1260 was expected. Price has remained below 1300 psychological level and maintained the sell-off. The chart below shows the current wave count. 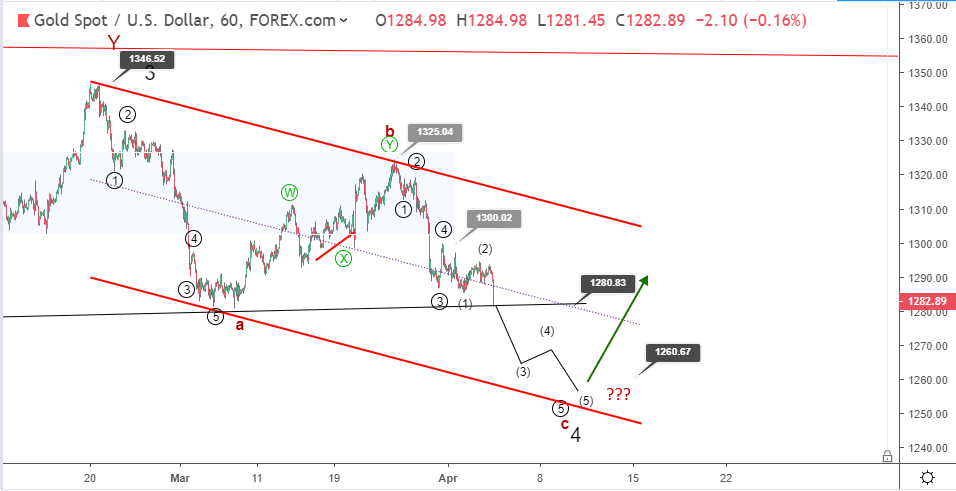 The chart shows the price approaching 1280. A break below will see it continue the wave c of the 4th wave to 1260 or slightly below. At 1260 and its neighborhood, fresh demands for the precious metal should be watched.