October 2018 | AtoZMarkets – Gold continues the downside move as the week sets up for a more deep bearish move. Early in the London session today, price broke below 1225 intraday support. If the bearish move continues, it would probably drop further below 1218 intraday support before heading to the 1200 handle. The bearish move was very much expected from a general technical analysis view and specifically Elliott wave perspective.

The year-long bearish impulse wave was expected to continue after the end of the 4th wave. The 4th wave, which is a Zigzag pattern, happened to be completed slightly above 1240 intraday resistance level, with an ending diagonal pattern. Ending diagonal are terminating patterns. They imply the end of a trendy or corrective price move. Since this pattern completed, price has dropped about 200 Pips to trade at 1223 (at the time of writing). If price has actually completed wave 4, then Gold will end the year far below 1200.

In the last Gold technical analysis, we expected price to drop below 1225 and 1218 to show its commitment downside after an ending diagonal at 1243. Price is now getting close to 1218. The 5th wave of the year-long bearish impulse wave might be ongoing. 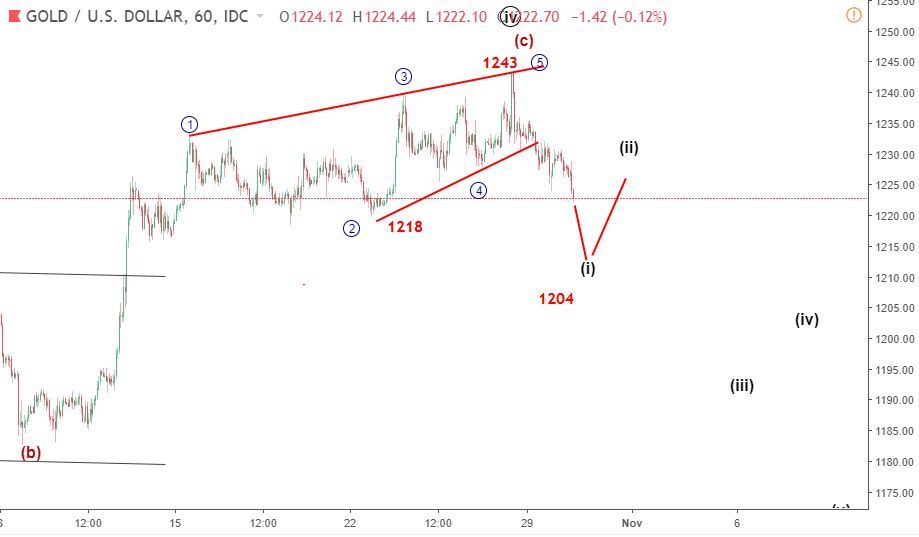 The base of the diagonal pattern at 1218 is expected to be taken out as price completes wave (i) of the 5th wave. Wave (i) could go as deep as 1204 before it corrects upside. If this wave count is validated by price, Gold will drop to 1120 in the coming months. On a lower term, we would probably see price drop to 1200 at least.

Do you have an alternative to this technical forecast? Please share with us in the comment box below.