Get VIP Trading Signals Market Watch
Trade Now Your capital is at risk.
In January, the number of unique active Bitcoin addresses reached 22.3 million amid growing network activity and the rate of the first cryptocurrency, which exceeded $42,000.

February 2, 2021 | AtoZ Markets – A new milestone in the history of Bitcoin was marked by the Glassnode cryptocurrency market data aggregator. According to the company, the number of active Bitcoin addresses hit a new record in January:

"In January, over 22.3 million unique addresses were active on the network, sending or receiving BTC - the highest monthly rate in Bitcoin history to date." 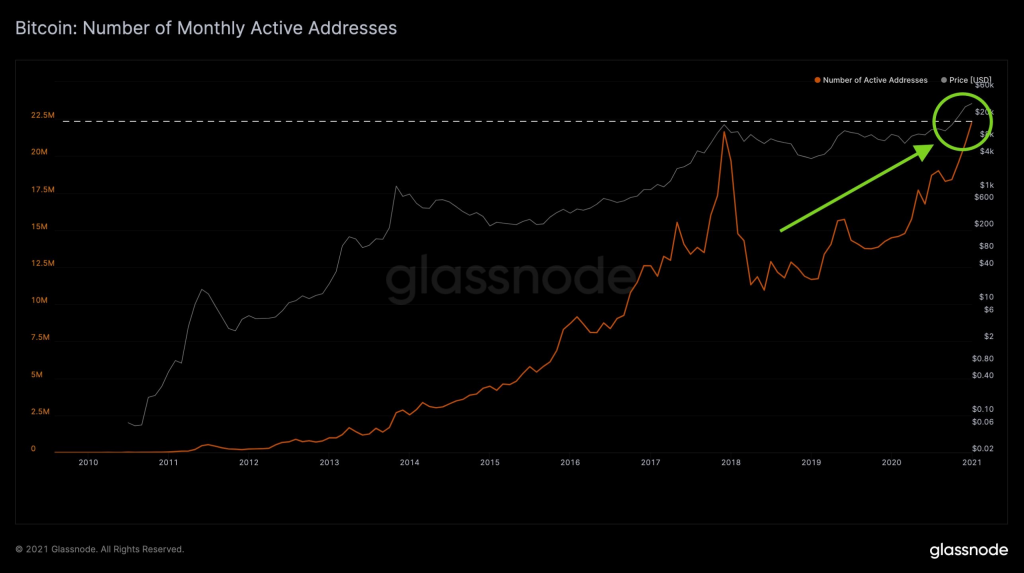 The January surge in activity surpasses the previous record of 21 million active addresses in December 2017. Since 2017, the number of unique active Bitcoin addresses has not dropped below 10 million per month.

Analysts also noted that the number of "active address groups" on the Bitcoin network has dropped significantly since the peak to new highs in early January. Glassnode defines such groups as "clusters of addresses controlled by the same user."

BTC trading volumes surged to record levels last month, when the price of bitcoin for the first time exceeded $41,000 on January 8. However, at the end of January, the rate of the first cryptocurrency briefly dropped to $28,800 and now bitcoin is trading at $34,132.

Late last month, the volatility of Bitcoin has risen to the level of March 2020, when at the start of a pandemic have fallen all markets. Previously, volatility reached its highest levels during periods of a bull market.