According to an official exit poll, the Conservative Party is seen to be leading in the race for seats in UK’s general elections. So far, the exit poll showed the Conservatives winning 316 of Parliament’s 650 seats, with Ed Miliband’s Labour Party trailing behind on 239 seats.

The pound experienced a strong rally, jumping about 0.7% across board against all 16 major counterparts as the news of the Tory leader David Cameron hit the media. Results for individual seats will be announced gradually through the night in the U.K. 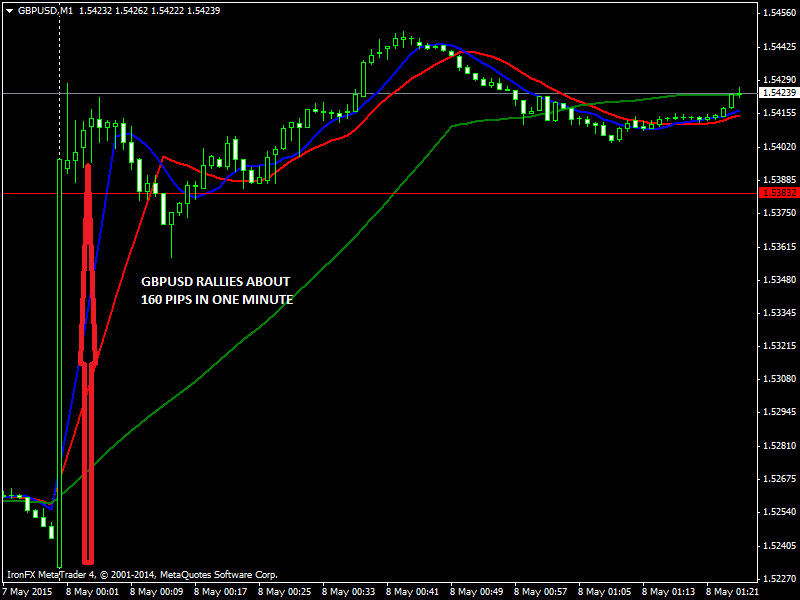 GBPUSD rallies about 160 pips in one minute

It is becoming quite obvious that David Cameron’s Conservative party is set to remain in power based on recent data. This defies opinion polls in the run-up to the election which pointed to the likelihood of a stalemate, therefor no clear winner. This would have prompted further negotiations by both parties.

Simon Derrick, chief markets strategist at Bank of New York Mellon Corp. in London said:
“It reduces the possibility of a long drawn-out negotiations over the make-up of the next government,” “Obviously we’ve got to wait to see how it plays out during the night but what we’ve seen so far certainly seems positive for investors.”