GBPUSD completed an impulse wave at 1.3175 and has dropped more than 50 Pips to stabilize around 1.31. The market awaits today’s Fed fund meeting.

Amid Brexit deal concerns and the aftermath of the US mid-term elections mid-week, the Cable advanced to 1.3175. By this move, Sterling has completed an impulse wave and price is expected to start a 3-wave bearish correction. Before the end of yesterday, price had already dropped 50 Pips. The decline continued today and price now stays around 1.31 handle. Brexit talks have been a bit silent while the market awaits today’s FOMC Fed decision. The dollar has become stronger ahead of FOMC. With an expanded economy and rising wages, the FOMC is expected to keep rate at 2.25%. The next 0.25% increase is expected in December in their next meeting.

In the last update, price was expected to rally to 1.31-1.3150 to complete a bullish impulse wave. After completing an impulse wave rally from late October at 1.27, the Cable might just drop back to 1.3 from the current 1.31 price level. It appears that price might drop back to 1.292 intraday level in a 3-wave bearish correction at least. The chart below shows the new Elliott wave forecast ahead of Fed meeting. 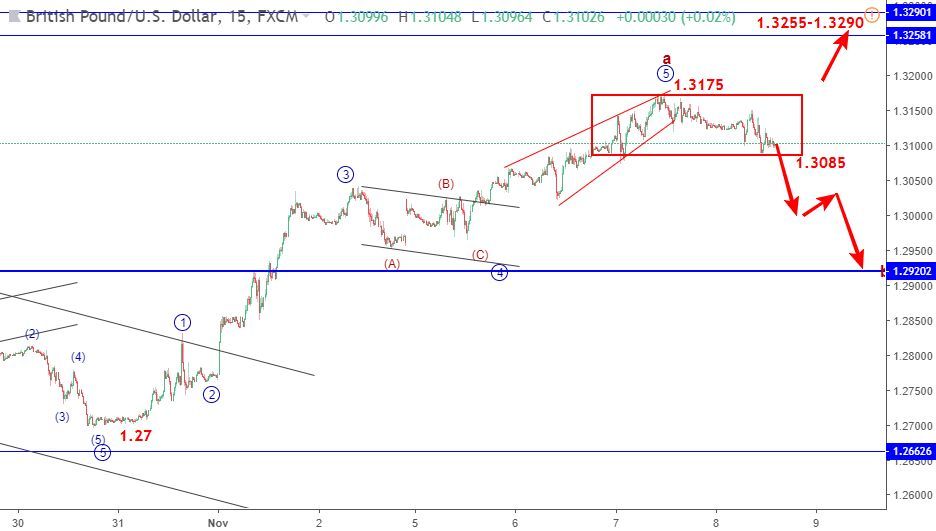