GBPUSD opened without any gaps after Sunday’s EU Brexit approval. How can the agreement affect the Cable in the coming days?

The EU summit ended on Sunday in less than 40 minutes with an approval of the Brexit deal. Sterling was priced in and there were no significant gaps when the market opened yesterday. The deal though conclusive from the EU end, does not satisfy all parties as the Irish border ‘backstop’ and other unpopular issues were not addressed. The deal is expected to face strong opposition in the house. Hours after the EU summit, DUP’s Nigel Dodds says ”Brexit deal worse than no deal”. Cable is still so much under bearish pressure as the deal may drag on further before next year’s official parting.

Last week, price spiked from 1.28 to 1.2927 in just about 1 hour. However the gain was quickly lost back to the bearish force as price dropped back to 1.28 on Friday. This week started around the 1.28 level in the Asian session. Early in the London market, there has been a price surge to 1.2845 but the pattern on the chart still shows high bearish possibilities. 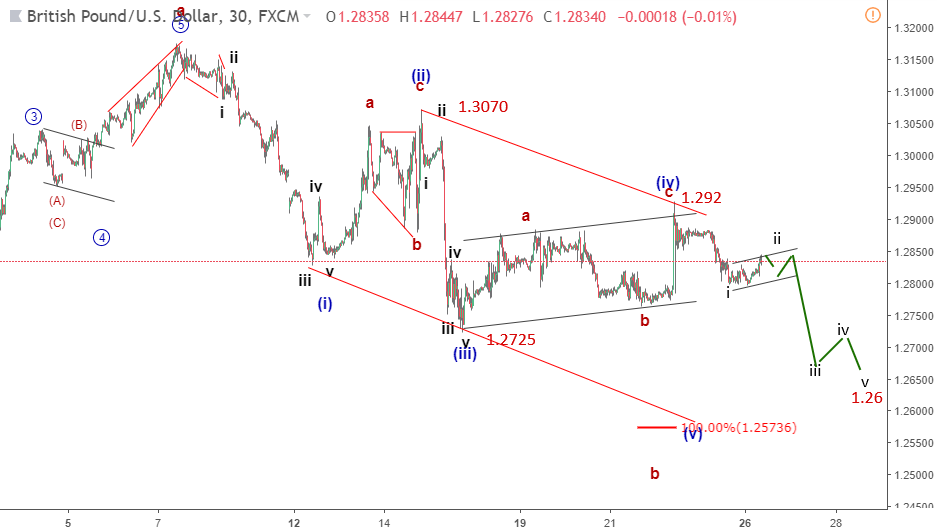 This month has been largely bearish for the Sterling despite a weak Dollar. Price dropped about 450 Pips from 1.3175 to hit 1.2725 month low. The wave pattern from 1.3175 also looks like an emerging leading diagonal pattern. The 4th leg of the diagonal took longer time than the 2nd wave but the bearish fire is not yet out, at least from technical perspective. From the current level, as the chart above shows, there is more attraction to the downside than otherwise. A dip to 1.26 is still very much likely especially if price breaks below 1.2725 low. To the upside, if 1.2725 still holds as a support and price breaks above 1.292, we should see further rallies aiming 1.3070 and 1.3175. Brexit still remains the major risk.