Pound Sterling rallies back to 1.26 after dropping close to 1.25 yesterday. What next? The following give insights based on Elliott wave theory.

December 11, 2018 | AtoZ Markets -GBPUSD dropped fast yesterday. At first, it dropped more than 100 Pips to 1.2605 following a rumor that UK PM Theresa, might drop the parliamentary vote in order to avoid an impending loss. When the news was confirmed moments after, the Cable dropped and was just 1 pip away from 1.25. The vote in the house of commons that was scheduled to hold today was highly anticipated to end sour for the PM. However, price has recovered more than 100 Pips with a move to 1.2635 after reports that the Irish backstop can be renegotiated. Despite the Brexit burdens, UK labor market remains strong. Average earning increased by 3.3% despite the Cable being under a big bearish pressure in most part of this year.

GBP is still under fierce bearish pressure as the Brexit uncertainty lingers on. A dip to parity is high on the cards.

GBPUSD has maintained the long term bearish trend from 2014. Since 2014, the bearish move is evolving into an impulse wave. The chart below shows the 5th wave of the impulse wave could continue to 1.0 as Pound-Dollar hits parity. 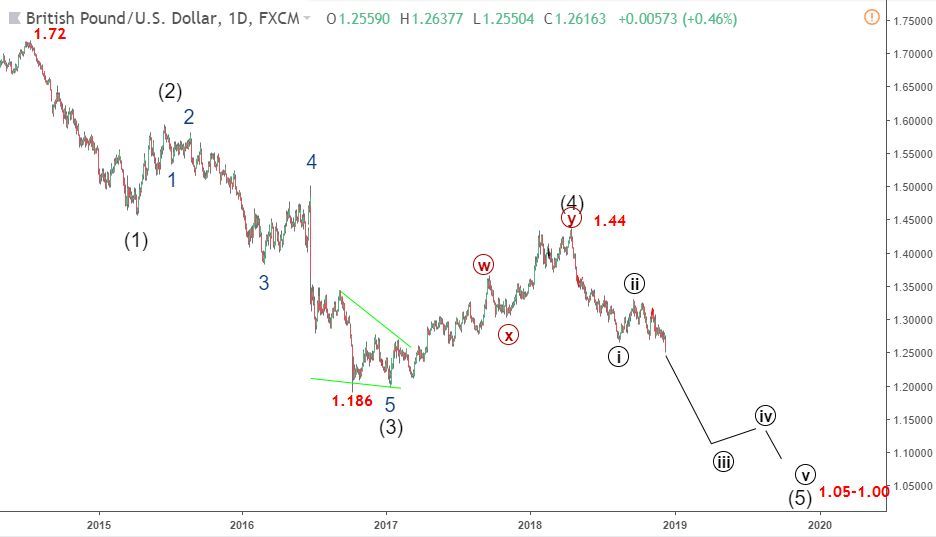 The 4th wave completed at 1.44 in April. The 5th wave is expected to continue below 1.186 (2016-2017 low). The bearish pressure on GBP is very clear on the chart. Price is well likely to continue bearish throughout 2019 especially if the issues concerning Brexit are not yet solved or the whole idea is completely rejected. Unless a break above 1.44 happens, the long term sentiments favor the downsides.