GBPUSD bounces off 1.27 early in the London session and advances further going into the New York Session. Is price about to start a real bullish correction?

October 2018 | AtoZMarkets – There was some kind of optimism about Pound Sterling after Monday's budget reading ended with a bullish undertone. An expected increased growth from 1.3% to 1.6% and a better than expected borrowing figures in 2019 would probably lift GBP in the short term. Brexit deal talks, though currently silent, still remain the long term risks. Yesterday, Cable dipped to its lowest price since late August. After dropping below 1.2785 support level, it went close to 1.266 support. Technically, GBPUSD seemed oversold and was expected to be held at 1.266 or above for a bullish correction. 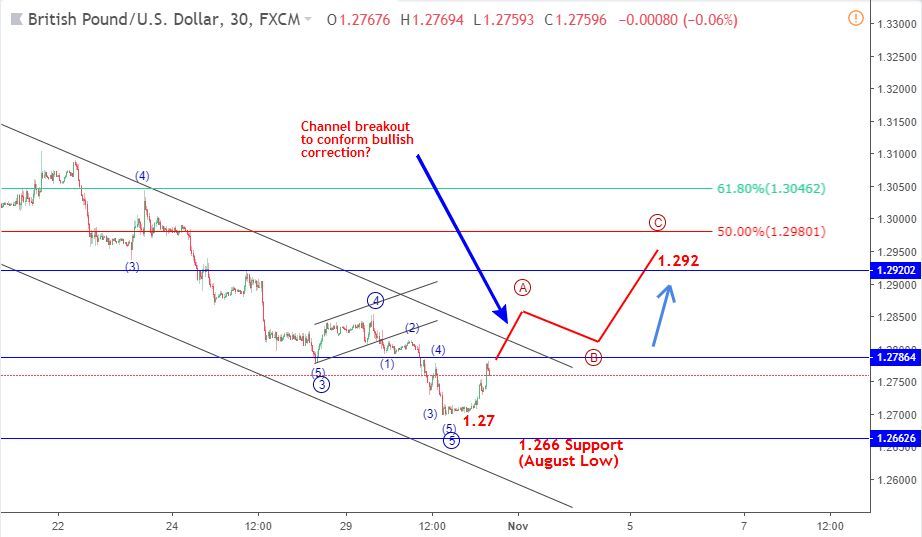 The chart above shows the bearish impulse wave from 1.326 which started this month. The bearish move bounced off 1.27, above 1.266 support. Price might be on a bullish correction to 1.292 level with a likely extension to 1.3 handle. This bullish scenario will be confirmed if price breaks sufficiently above the channel. The bullish move is expected to be corrective. If price remains below the channel instead, the rally from 1.27 might just be another small bounce leading to 1.266 or below.