October 2018 | AtoZMarkets – Since last week, Brexit negotiators have refused to come to any conclusion. The deal was said to be on hold as Brexit team and the EU couldn't agree on details. GBPUSD has continued to falter. Early in the week, it dipped to its 11 week low at 1.292. Yesterday, price hit a fresh October low at 1.28 after breaking below the previous 1.292 low. More levels are expected to be taken out in the coming days. The Dollar on the other hand has resumed upside this week. The Dollar index hit above 96. Focus will be on today's US data. US Q3 GDP data is projected to rise by 3.3%. Though slower than Q2's 4.2%, it's still a healthy one. USD will react to large deviations from the expected figure. 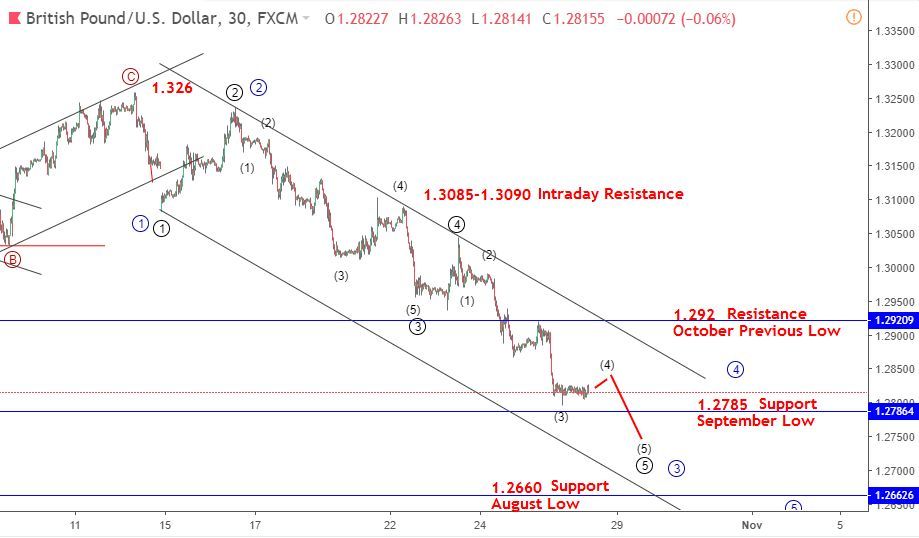 From 1.326, the decline is developing into a bearish impulse wave. After price broke below the previous October low at 1.292, it was evident that the bearish trend would test 1.2785 September low and probably 1.2660 August low. The 3rd wave of this impulse wave is probably about completing. Another sideway correction might happen toward the upper line of the falling channel. In as much as price is contained in this channel, the move will continue downside after each bounce or sideway move. There are two wave counts shown above. The one in black suggests the impulse wave might complete just below 1.2785 while the second in blue suggests price would go deep into 1.266 support level. On the upside, a break above the channel could see price retesting 1.292. Above 1.292, there is 1.3085-1.3090 zone which might act as a resistance to any huge bullish move.

Can USDJPY Hold Its Bullish Momentum and Reach 111.00 Key Area?
Forex Crypto
Top 5 Forex Brokers
Top 5 Crypto Exchanges
Your subscription could not be saved. Please try again.
Thank you for subscribing. You will be the first to receive all the latest news, updates, and exclusive advice from the AtoZ Markets experts.
Everyone is reading
SEC Lawsuit Against Ripple May Drag On Until 2022
Ethereum Facing Support Around $2,300 Price Area - Will Strike Upward?
Will the Prices of Gold and Silver Rise After FED Meeting?
close ×