GBPUSD is moving calmly around 1.3060 as the markets are wary of Brexit headlines and today’s US congressional elections. What are the technical sides and important price levels to watch?

November 2018 | AtoZMarkets – The US congressional election is coming later today. Prior to this event, markets moves are quite limited. There is also the ongoing Brexit deal/no-deal potential headlines which GBPUSD traders are now used to. This week opened with a gap on all GBP pairs after Sunday times reported that the preparation for a deal is in far more advanced stages than previously disclosed. Despite today’s US elections, Brexit still pose the biggest risk on the Pound. Developments on this deal have moved Sterling quite often as prices have spiked up and down with every hope and disappointment. The Cable has however found its way up since last week, gaining more than 370 Pips (+3%) from 1.27. The bullish move was partly down to positive revelation from the last budget reading, and largely to positive Brexit headlines.

In the last update, the rally from 1.27 was labelled as a bullish impulse wave. The price was expected to drop to 1.292 to complete the 4th sub-wave of this trend pattern. The chart below shows that wave 4 didn’t touch 1.292 before price continued the 5th sub-wave to 1.3050. 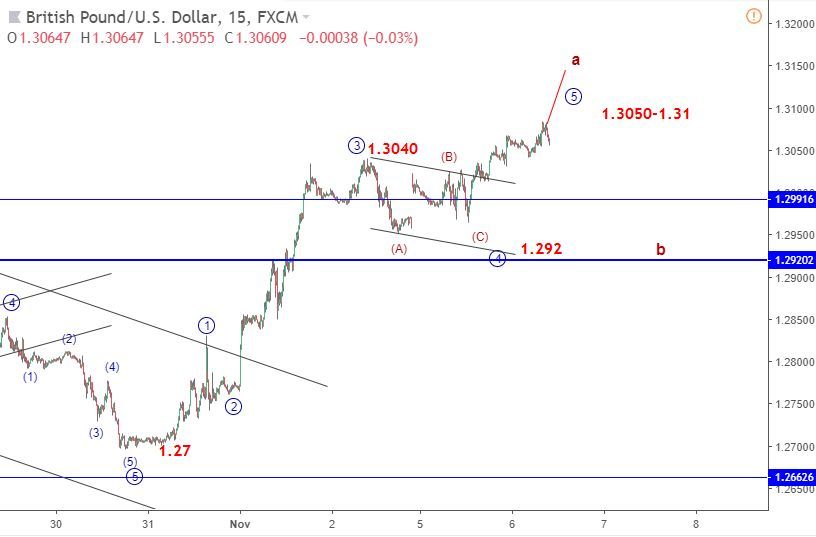