Following the confirmation of Boris Johnson as the new UK Prime Minister, the Pound followed up with a bullish spike but quickly retreated. The following insight is based on the Elliott wave theory.

July 23, 2019 | AtoZ Markets - The Pound early gains cancelled out shortly after the new UK PM was announced. Boris Johnson took over from Theresa May after securing more than 92,000 votes in today's Tory leadership election. Now that the election is over and new leadership is confirmed, investors will access how this bode for the Brexit.

Before securing his new position, the PM has always been a Brexit fan. He repeatedly said the UK should leave the EU with or without a deal. Whether he would be able to get this done by October 31 remains to be seen. UK politics is expected to remain volatile as uncertainties remain. After the winning, the UK PM told lawmakers that the UK must leave the EU by the deadline. Time will tell whether he will be able to achieve this.

GBPUSD started the new week bearish after it dropped from 1.251 to 1.2415. Last week, the price had dropped to 1.238 thus hitting its lowest since March 2017. Given his Brexit stand, the news of PM Boris winning the Tory election was expected to spark a bullish spike. After the result was announced, GBPUSD only spiked from 1.2425 to 1.248. It, however, dropped swiftly moments after and now currently trades around 1.2450. The fear of 'No-Brexit' has amputated the bulls to get aggressive coupled with the USD gains in recent weeks. The Cable remains in the bearish shadow at the moment. However, political headlines still remain key factors that could inject high volatility into the Sterling. Friday's US Advanced GBP data could also be a big factor to its volatility this week.

Since November 2007, GBP has lost over 40% against the USD. The long term weekly chart below shows price is still under the bearish pressure and could fall further. 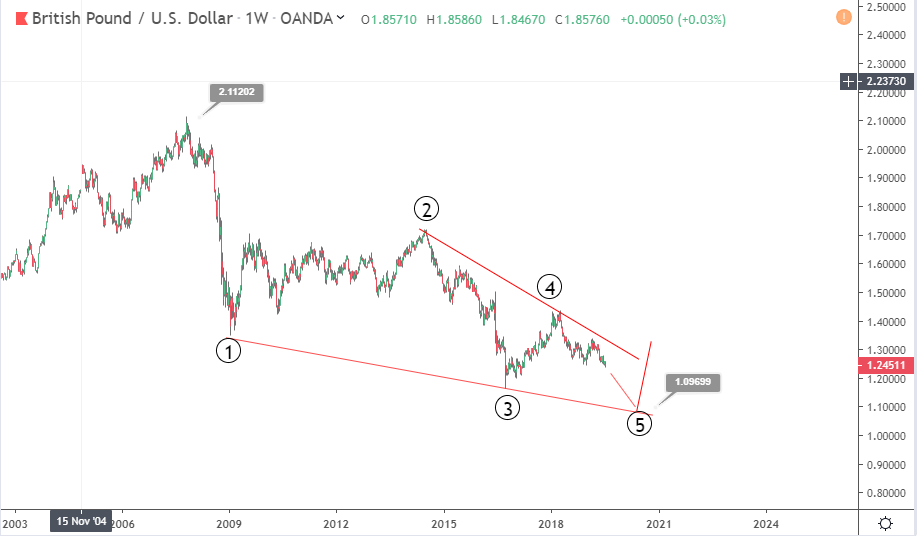 From 2.11 (November 2007), the weekly chart formation is emerging into a diagonal (wedge pattern). It looks more like a leading diagonal and a bullish correction is expected to follow up to 1.6-1.7. The 5th leg of the diagonal is not yet complete. GBPUSD could continue bearish throughout 2019 and a larger part of 2020 and could hit 1.1 in the process. Meanwhile, the short term forecast shows a bullish move toward 1.29 could happen before the Cable crashes further. One wonders how Brexit will contribute to this possibility. Time will tell.